Join the Bullock Museum for a screening and conversation about Signature Move.

Signature Move is a hilarious and heartfelt look at modern families and the complexities of love in its many forms.

Written by Lisa Donato and Fawzia Mirza and directed by Jennifer Reeder, Signature Move is a coming-of-age melodrama about a secret new romance, complicated family relationships and embracing new hobbies no matter what form they take. Signature Move comedically explores identity as characters either choose to run or approach their fears in the face of adversity.

This screening is part of Femme Film Fridays, a film series highlighting the cinematic works of women, both behind and in front of the camera. Now in its second season, all the films for the 2017-2018 season address ideas of identity. This evening's program includes a film screening with Q&A to follow with Lisa Donato, co-writer of Signature Move and short filmmaker B.B. Araya. Prior to the feature film screening is B.B. Araya's short film, We Are Sisters. Come early at 6pm for a welcome reception with cash bar.

"Reeder’s films are as rich and lively as dreamscapes, sneaking in a (toy) tiger opponent …" - Sophie Mayer (Sight & Sound)

Jennifer Reeder constructs personal fiction films about relationships, trauma and coping. Her award-winning narratives are innovative and borrow from a range of forms including after school specials, amateur music videos and magical realism. These films have shown consistently around the world, including the Sundance Film Festival, The Berlin Film Festival, The Venice Biennale and The Whitney Biennial. Her awards include several that have qualified her films for Oscar nomination. She won a Creative Capital Grant in Moving Image in 2015, short film funding from the Adrienne Shelly Foundation in 2016 and short film funding from the Hamburg Film Fund in 2016.

Lisa Donato specializes in directing, writing, and producing for commercial and indie video/film productions. Production and directorial credits include shows for National Geographic Wild, The Oprah Winfrey Network (OWN), feature documentary (She Started It), award-winning short films (Sugarhiccup, Reclaiming Pakistan) and multiple other web series, short films, and music videos. Donato's searing, personal stories have been published in the LA Times, Self, Curve, Advocate, 5280 Magazines and more. Her film production company, Sparkle Motion Films specializes in socially-aware branding videos and independent filmmaking that sparks change and moves people to take action. She’s working on her next feature screenplay, Woman Sitting In Chair and is in pre-production on a short film about power dynamics in couples and ballroom dancing, Foxytrot, that Fawzia Mirza also stars in.

Fawzia Mirza is an actor, producer, writer who believes in dispelling the myth of the‘model minority’ in mainstream media and in the power of comedy to tackle divisive topics and breakdown stereotypes. In the last two years, she was named a White House ‘Champion of Change’ in Asian American Art & Storytelling, a 3Arts Grant Recipient in Acting, a ‘Top 10 Creative’ by Indiewire magazine, one of Chicago's ‘Rising Stars’ of indie filmmaking, the 2017 3Arts Fellow at the Djerassi Residents Artists Program and was named to New City Magazine’s ‘Film 50’ list. She was part of the Emmy & GLAAD nominated, Gotham Award-winning online series Her Story. She has written theatre, including a one woman play Me, My Mom & Sharmila which she performed in Pakistan sponsored by the US Embassy which she’s developing into a feature film. She has created and produced web series, short films, art installations, stand-up comedy and more. Signature Move, which she co-wrote, co-produced and stars in, is Mirza’s first feature-length film she’s produced.

B.B. Araya is a filmmaker whose work explores humanity through the lens of women of the African Diaspora. Upon moving to Austin, she interned for Academy Award nominated director, Richard Linklater. Her short film Beta and short film series  We Are are streaming on Issa Rae's YouTube channel. 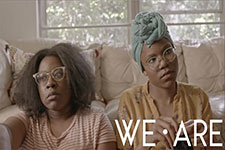 B.B. Araya is a filmmaker whose work explores humanity through the lens of women of the African Diaspora. Upon moving to Austin, she interned for Academy Award nominated director, Richard Linklater. Her short film Beta and short film series We Are are streaming on Issa Rae's YouTube channel.