Join the Bullock Museum for a screening and conversation about Mary Lou Williams: The Lady Who Swings the Band.

Mary Lou Williams: The Lady Who Swings the Band is a documentary about the life and music of this renowned jazz pianist, composer and arranger who has remained largely unknown.

Mary Lou Williams was one of the greatest innovators of jazz during an era when jazz was the most popular form of music. Mary Lou Williams: The Lady Who Swings the Band is a documentary that explores the life, work and ambitions of one of the 20th centuries' leading jazz musicians and savants, Mary Lou Williams. A woman bathed in talent and expertise, Mary Lou Williams  fought to convince and claim an identity in the music world and paved the way for many women who followed her.

This screening is part of Femme Film Fridays, a film series highlighting the cinematic works of women, both behind and in front of the camera. Now in its second season, all the films for the 2017-2018 season address ideas of identity. This evening's program includes a film screening with Q&A to follow with musician and educator Akina Adderley. Prior to the feature film screening will be two episodes from Doyin Oyeniyi and Evelyn Ngugi's series, Austin While Black.  Come early at 6pm for a welcome reception with cash bar and FREE drink samples.

"She was more than just there—she was one of the key developers of the musical ideas of these eras, and she did more than just remain up-to-date; from era to era, she surpassed herself." - Richard Brody (The New Yorker on Mary Lou Williams)

Carol Bash (Producer/Director) is the Founder and President of Paradox Films. She has over 15 years of experience in media production, with a solid background in independent filmmaking and broadcast journalism. Carol has worked with several prestigious documentary production companies in roles ranging from producer, director, cinematographer, coordinating producer, archival researcher and associate producer. Most notably, she worked with Firelight Films on Freedom Riders, which won three Primetime Emmy Awards and premiered on American Experience; Two-Tone Productions on Banished, which premiered at the 2007 Sundance Film Festival and aired on Independent Lens; Kunhardt Productions on the groundbreaking four-part PBS series African American Lives; and with Firelight Films on A Place of Our Own, which premiered at the 2004 Sundance Film Festival and was broadcast on Independent Lens. In addition, Carol has produced and directed several short promotional films for PBS, World Channel, and non-profit organizations. Prior to her career as an independent filmmaker, she worked in broadcast television at CBS News and the BBC.

About the Short Films and Filmmakers

Austin While Black is a web series sharing the stories of Black Austinites.  Screening this evening will be Episode 1: Hakeem Adewumi and Episode 4: China Smith. 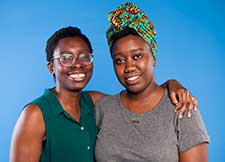 “Jazz is in Akina Adderley’s blood, and it flows with a warm mix of old-school soul and R&B.” –Margaret Moser, The Austin Chronicle

Akina Adderley is a vocalist, songwriter, bandleader, conductor, and educator based in Austin, Texas. Nicknamed “the little woman with the big voice,” Akina currently fronts three projects: her 5-piece jazz-rooted neo-soul band, Akina Adderley and the Upper East Side; her 8-piece horn-driven soul band, Akina Adderley & The Vintage Playboys (with whom she has released two records), and jazz/folk/world outfit, Nori (with whom she has released an EP and a debut full-length record). Akina has performed all over the country and has shared bills with Booker T., Budos Band, Bob Schneider, Gary Clark, Jr., Alejandro Escovedo, Pinetop Perkins, Carolyn Wonderland, and Big Sam’s Funky Nation, and she has sung backing vocals on the albums of Charlie Mars and Gregg Rolie (of Santana and Journey). Sometimes a soul singer, sometimes a jazz songstress, Akina will always move you with what the Austin American Statesman calls her “rich, emotive pipes.” Akina is also the Music Director at the Griffin School. Look out for a new Nori album later this year, as well as new music from The Upper East Side and The Vintage Playboys!