Join the Bullock Museum for a screening and conversation about Lane 1974.

Set in the world of the counterculture hippie life of the 1970s, Lane 1974 tells the true coming-of-age survival story of a young teen’s desperate struggle to find normalcy in her mother's nomadic life.

Based on Clane Hayward’s memoir, The Hypocrisy of Disco, Lane 1974, co-written and directed by S.J. Chiro, is about Lane, a 13 year old girl who struggles to keep her family together as her iconoclast mother moves without warning through the communes and dusty back woods of Northern California.  Lane, at a very young age, is forced to explore what she wants her identity to be. Will she decide for herself, or let the world decide for her?

This screening is part of Femme Film Fridays, a film series highlighting the cinematic works of women, both behind and in front of the camera. Now in its second season, all the films for the 2017-2018 season address ideas of identity. This evening's program includes a film screening with Q&A to follow with Associate Professor, Dr. Donna Kornhaber and short-filmmaker, Stephanie Ard. Prior to the feature film screening is Stephanie Ard's short film, That Day.  Come early at 6pm for a welcome reception with cash bar.

The film was filmed around California and Washington state and its world premiere was at the SXSW 2017 Film Festival. S.J. Chiro won the New American Cinema Competition award at the Seattle International Film Festival.

Meet the Director question: What did you discover (if anything) about your past through your recreating this story? I had, for the most part, closed the book on my past. I had been very focused on creating my own life and moving forward. The process of making this film forced me to revisit every piece of minutiae associated with that time in my life. Starting with Clane Hayward’s beautifully written book, I was able to go back and piece together that world and that time in our collective history as Americans. I was able to see my parents and their contemporaries from a distance and find a great deal of empathy for their plight, and marvel at their bravery at being willing to put aside physical comforts for the comfort of knowing that they were living up to their own ideals. I discovered that my past was not something to run away from, but instead, something to treasure.

SJ Chiro graduated from Bennington College with a degree in theater and French literature. She spent much of her early career as an actor and director in Seattle’s theater scene. Her 2006 debut short film Little Red Riding Hood garnered awards for Best Live Action Short at Children’s Film Festival Seattle and Best Cinematography at the San Francisco Women’s Film Festival. Her next film, Third Day's Child, premiered at the Seattle International Film Festival 2008 and screened at the Science Fiction & Fantasy Short Film Festival, One Reel Festival of Shorts, and Palm Springs International Festival of Short Films, among others. Next, her short film Howard From Ohio was awarded a special jury prize at SIFF (Seattle International Film Festival) 2011, best short film at Seattle’s Local Sightings Film Festival 2011, as well as the Director's Award at the Boston Underground Film Festival. Her short film The Epiphany, based on a short story by Jonathan Lethem, was made for the Fly Film Challenge, SIFF 2011. This film marked the first collaboration with producer Mel Eslyn. In 2011 a tribute to Jørgen Leth’s The Perfect Human, was commissioned by Seattle's The Project Room. Most recently a collaboration with Charles Mudede, The Third Wheel, premiered at SIFF in 2013. LANE 1974, Chiro’s first feature film, draws on her own experience as a child of revolutionary thinkers who retreated to a communal life in Northern California in the 1970s.

Mel Eslyn is an independent filmmaker who splits her time between Seattle and Los Angeles.  Winner of the 2016 Independent Spirit Piaget Producer’s Award, she has produced such festival favorites as the 2014 Sundance hit The One I Love, directed by Charlie McDowell (Radius/TWC), Clea DuVall's debut The Intervention (Paramount Pictures/Samuel Goldwyn Films) and Ross Partridge's Lamb (The Orchard).  Her other produced features include Blue Jay (Netflix/The Orchard), Uncle Kent 2 (Factory 25), Rainbow Time (The Orchard), Dreamland (Orion) and Your Sister's Sister (IFC).  She is currently overseeing film development and production for Duplass Brothers Productions.

Jennessa West started her production career working in one hour episodic television for Warner Brothers Television, the FX Channel and CBS Television while living in Los Angeles. In 2012, Jennessa founded Pressing Pictures, LLC – a production company dedicated to creating narrative and documentary work generated by voices that are sometimes absent in mainstream media. Jennessa’s producing credits include My Last Year With The Nuns which premiered at the Seattle International Film Festival. Spin which premiered at the Julien Dubuque International Film Festival, Julia's Farm, and The 14/48 Projects documentary. She co-produced a short virtual reality piece, Auto, with director Steven Schardt. She recently wrapped production for Megan Griffith’s feature film Sadie in January. Jennessa has signed on to produce the upcoming film Now I'm Fine along with director Charles Mudede, and producer Michael Seiwerath in the spring of 2017.

Despite the feral childhood Clane Hayward describes in The Hypocrisy of Disco, Clane is a copywriter, editor, and technical writer for Silicon Valley Fortune 100 businesses. She lives in San Francisco with two well-meaning dogs and one remarkable man. She is working on her second book for the third time, about her service in the United States Navy.

Born in Seattle, Sophia Mitri Schloss was described from a young age as a gifted actor with an old soul. Numerous passions include Cuban music, piano, guitar, and singing in addition to math, reading, programming, writing, painting, and soccer. Favorite inspirations include The Beatles, Stevie Wonder, Joni Mitchell, Mark Twain, Malala, and Emma Watson. After shooting Lane 1974, Sophia went on to a leading role in Amazon’s The Kicks. Previous roles include the starring role of Isabel in NBC’s pilot Isabel, alongside Marcia Gay Harden and Kevin Nealon, and guest star stints on Portlandia, The Librarians, and Grimm. She most recently starred in the title role of Sadie in Megan Griffiths’ upcoming feature Sadie with Melanie Lynskey, John Gallagher Jr., Danielle Brooks, and Tony Hale.

Katherine Moennig can be seen on the critically acclaimed Showtime series, Ray Donovan.  She also starred in Curtis Hanson’s Three Rivers for CBS and Showtime’s hit series The L Word. On the feature side, Moennig’s credits include My Dead Boyfriend for director Anthony Edwards, Default opposite David Oyelowo, Gone alongside Amanda Seyfried, The Lincoln Lawyer opposite Matthew McConaughey, Everybody's Fine, Art School Confidential for Terry Zwigoff, Invitation To A Suicide, The Shipping News for Lasse Hallstrom and Love the Hard Way alongside Adrien Brody.

That Day tells the story of a young girls’ personal reality, the day that her father passes away.

Stephanie Ard is a writer, director, actor, producer and comedian based out of Austin, TX.  Her debut short film That Day premiered at the world renowned Berlin International Film Festival and has since played at many other prestigious festivals. 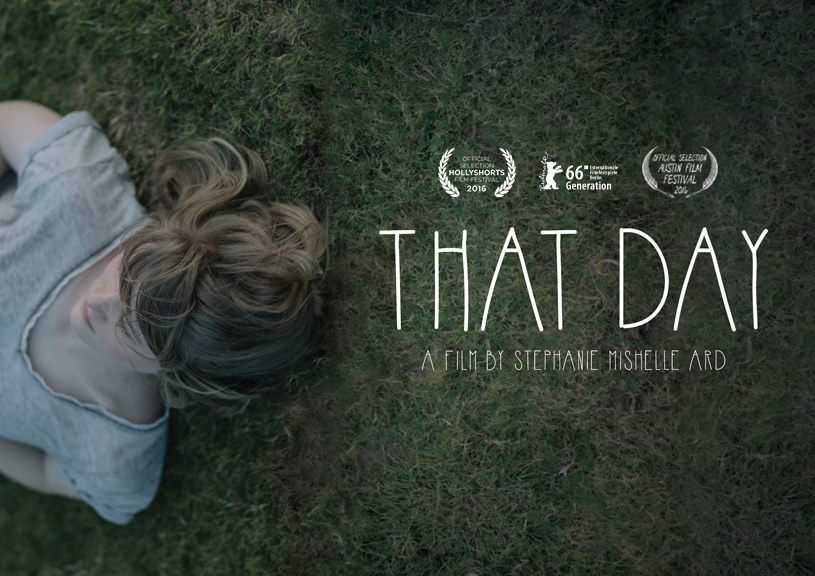 Donna Kornhaber is Associate Professor in the Department of English at the University of Texas at Austin, where she teaches film. She is the author of Charlie Chaplin, Director (Northwestern University Press, 2014) and Wes Anderson (Contemporary Film Directors Series, University of Illinois Press, 2017), and her work has appeared in Cinema Journal, Film History, and Camera Obscura, among numerous other journals and edited collections.  In 2016, she was named an Academy Film Scholar by the Academy of Motion Picture Arts and Sciences for her project Women’s Work: The Female Screenwriter and the Development of Early American Film.

Stephanie Ard is a writer, director, actor, producer and comedian based out of Austin, TX.  Her debut short film That Day premiered at the world renowned Berlin International Film Festival and has since played at many other prestigious festivals.