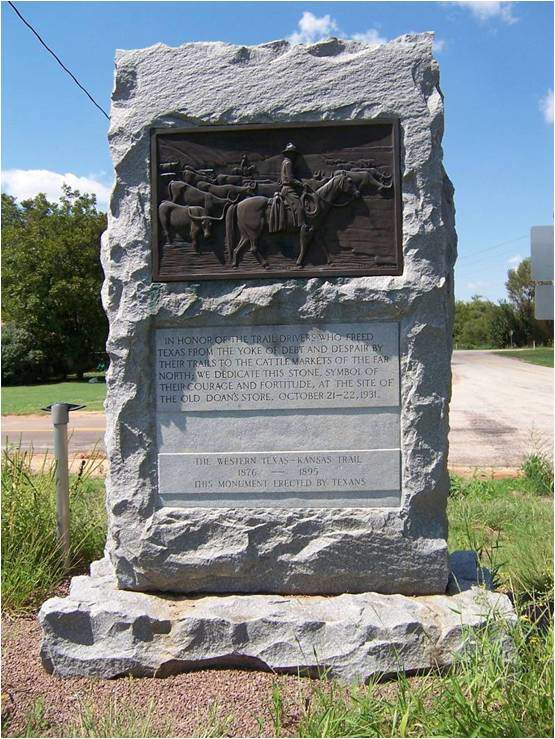 By 1931, the old drovers of the cattle drives of the latter part of the 19th century were advancing in age. Mindful of their legacy, they formed the Old Time Trail Drivers Association to record their stories and, in their words, “Set the record straight.”

They wanted to clear up confusion about the cattle trails that went north from South Texas. The two most prominent Texas trails were the Eastern (or Chisholm) Trail and the Western Trail. It didn’t help matters that the trails were known by various names by the drovers. For example, the Chisholm Trail had also been referred to as the Caldwell Trail, and the Western as the Fort Griffin-Dodge City Trail. In 1931, the Old Time Trail Drivers Association passed resolutions noting that the Great Western Trail passed north from the San Antonio area through Fort Griffin and crossed the Red River at Doan's Crossing in Wilbarger County. The Chisholm Trail crossed the river at Red River Station, to the east.

At about this same time, P.P. Ackley, a retired drover and cattle inspector from Elk City, Oklahoma, began his own project to mark the trail—calling it the “Longhorn Chisholm Trail.” Plans advanced to place a granite marker honoring those who went up the Western Trail at Doan's (Doans) Crossing, an important supply stop on the trail, with Mr. Ackley putting up $1,000 toward the project. But when the marker was unveiled in October 1931 after the 17th reunion of the Old Time Trail Drivers, the Texans were livid. The monument bore the inscription,

In honor of the trail drivers who freed Texas from the yoke of debt and despair by their trails to the cattle markets of the far north, we dedicate this stone, symbol of their courage and fortitude, at the site of the old Doan's Store, October 20-21, 1931. The Longhorn Chisholm Trail and the Western Trail, 1876-1895. This monument built of Texas Granite, by G. W. Backus.

In the weeks after the ceremony, George W. Saunders, president of the Old Time Trail Drivers, wrote letters to Ackley, Texas historian and folklorist J. Frank Dobie, and others. Ackley responded by telling the Texans they could return his $1,000 if they wanted to change the inscription on the monument, then placed other markers along the Western Trail designating the route as the Longhorn Chisholm Trail. He persuaded the Oklahoma Legislature to designate Highway 34 as the Longhorn Chisholm Highway. In one blistering letter to Ackley, Saunders referred to his “plans of becoming the Napoleon of the cattle trails.”

Even Will Rogers was drawn into the fray. In a letter to C.F. Doan’s daughter Bertha Doan Ross, he said, “You don’t need much monument if the cause is good. It’s only these monuments for no reason at all that has to be big. Good luck to you all anyhow.” Rogers’ words were included on a smaller granite marker placed by the State of Texas in 1936, “dedicated to George W. Saunders, President of the Old Time Trail Drivers Assn, who kept the records straight.” The two markers are side by side at Doans.

When visitors to Doan's Crossing today see the granite monument, they will see on one side the brands of pioneer cattlemen, and on the other side a bronze of a cowboy (supposedly modeled on P. P. Ackley) and 19 longhorn steers, representing the 19 years that the Western Trail was active. Under the bronze is the inscription. Sometime after 1936, the inscription was carefully modified to remove the last line and its reference to the Longhorn Chisholm Trail. The inscription now includes the words “The Western Texas-Kansas Trail” and "THIS MONUMENT WAS ERECTED BY TEXANS.”

Jeff Bearden is the Director of Forensic Psychiatric Programs at North Texas State Hospital in Vernon and acted as co-chair of the Vernon Rotary Club Marking the Western Trail project.

Susanne Waller A Tribute to Working on the Railroad
Samantha Luckey The City That Stole My Heart: The Life of Pocahontas Annawana Corbett née Thomas
Geronimo Elias A Lot on One Plate
See All Stories »