A Peruvian-Texan's "Bird's-Eye View" of Life 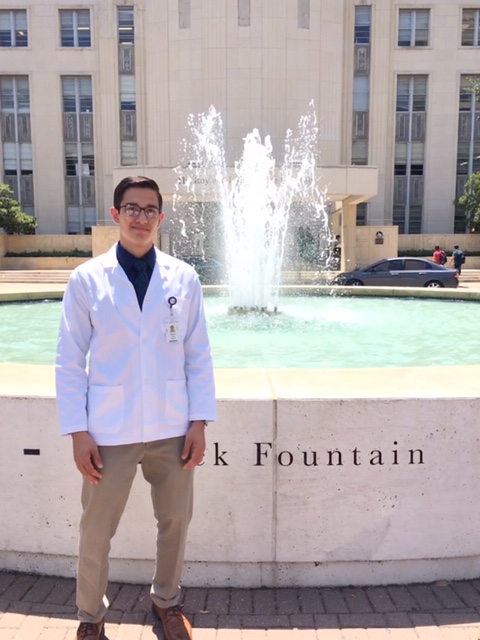 Share
Benjamin Tebbe at the Baylor College of Medicine (Houston, TX) for the JAMP 2019 Summer I Internship.

As he leapt from an airplane into a free-fall above Houston, Benjamin Tebbe-Trujillo was able to marvel at the Earth from a new perspective—a combo of altitude and vulnerability that few humans have experienced.

Though Ben eventually landed and spent the rest of his time in Houston on the ground, this was not the limit of his unique worldview.

Ben’s unique worldview helps me ponder questions I had been grappling with in my history class. Much of my upper-level history class on Faith and Power in Latin America at St. Mary’s University was spent learning about the various civil wars that devastated Latin American nations and the religious leaders who spearheaded justice and reform for the people in the face of tyranny. Peru was embroiled in a treacherous civil war starting in the 1980s that devastated the nation, with the majority of the victims being innocent citizens. When the government failed to support its general populace, religious folk stepped in as political activists and worked tirelessly to bring justice to victims and hope for prosperity in broken communities suffering military violence and government corruption.

As a Texan born years after these conflicts, I had trouble grasping that violence and fear were the reality for South Americans during this time. I remembered Ben whom I had met over the summer at a Baylor College of Medicine internship for pre-meds in Houston, Texas. When meeting the provost, Ben shared that he had grown up in South America. Seizing the opportunity to share his story and learn more about the role of faith in Latin America, I contacted Ben who agreed to talk about his experiences.

In the late 1990s, Ben’s father went to war-torn Peru as a missionary, working with a Bible college to train local pastors and act as a translator between Peruvians and American staff. There, he met his wife, a Peruvian native, and Ben was born in 1999. The family moved to the United States in the mid-2000s after the birth of Ben’s younger brother, but then returned to Peru after a few years. Ben describes his typical day in Peru as full of activity and family: he would wake up, have breakfast with his mom’s extended family, do schoolwork, have a big lunch with the family again, do more schoolwork, and in the evening after homework he would play soccer in the neighborhood with his brother and cousins. “We had a lot of family and big meals with everyone,” he recalled fondly before turning his focus to the soccer games. “Soccer is a big part of Peruvian culture.” His parents didn’t trust the local school system, so Ben and his brother were taught writing and reading by their father and math and science by their mother.

Though Ben was too young to do very much work alongside his parents, he remembers in great detail what the missionaries did. “As missionaries, the goal is to empower locals so eventually they can do the job right,” he recounted. “We had to try to find the balance between being helpful and not being too helpful, and not create a situation where they depend on the missionary.” He summarized this point using Texan speech, saying “We’re here to help y’all, but we don’t want to be here as a crutch.” To accomplish this, the missionary focused on training locals and made videos for them to use once the group left. The government and military were also still rife with corruption, “specifically bribes” Ben remembers, and his parents became involved in some justice work to attempt to rectify the relationship between local authority and the commonfolk of Peru.

How did Peruvians receive this assistance? The area was still recovering from the civil war and were “unsure of foreigners because they hadn’t had much contact with outsiders.” Ben said the locals approached missionaries with caution, where “at first there was a lot of fear” and a “what do they want” attitude. Eventually, the Peruvians were appreciative of the services offered by the missionaries, and “areas that used to be very hostile towards missionaries were very welcoming.” Faith was also affected by the presence of the missionaries. Though Ben’s particular focus was not to “share about Christian life and messages about Christ with the Peruvians” at the time, the religious nature of the missionaries incorporated some features of their faith along with their service to the Peruvian community.

Moreover, power structures also came into play during Ben’s time in Peru. The authority felt challenged, and the missionary “was a sensitive issue. We don’t want to take authority from local leaders, but rather help them realize they could do a better job” to serve the people. Though in the end, “local authorities have power to say what will happen,” Ben stated, his “parents and others had to challenge local authorities to do their jobs and refused to give them bribes.” Between the foreign missionaries and the locals of Peru, a unique relationship also sometimes developed. Ben points out that “there is a danger in missionary work where my family tried not to give themselves too much authority because it would be too easy for Peruvians to say ‘you guys come from rich country and have all the answers,’” when in reality, they “need to fend for themselves.” Because of this, Ben’s family made a specific point not to focus too much on specifically helping the Peruvians but rather on training the Peruvians to help themselves.

Ben and his family moved back to the United States when he was in high school, and though the purpose of the missionary was to assist the locals, he says “it really is a reciprocal thing,” where “you learn so much from those experiences and get a better understanding of whatever is being discussed and how you fit in the picture and learn about yourself.” He reflected further on the experience, sharing that “two greats things about being an intercultural kid” are being “more aware of differences in culture” and “more aware of life.” He said thoughtfully, “Who is the Benjamin of today, how different would I be if I hadn’t grown up that way?” Though these are nearly impossible questions to answer, being a “Peruvian-American is a unique experience, a broader perspective” that allowed him to “share those interactions” with the Peruvians and shape his character today. Like parachuting from the plane, the worldview that Ben gleaned from growing up in two worlds—Peru and Texas—was unique, enlightening, and exhilarating.

Ben credits the culture and spirit of Texas with the smoothness of his transition from living in Peru for most of his childhood to his return to the United States. He describes his arrival to the US as a “reverse culture shock: technically an American but you go abroad into Peruvian culture and then go back to America, so it was a learning curve in my own country.” His family formed close relationships with Texans “who, although they don’t understand our experience were great friends who listened,” and they joined a “good church to connect back” to their roots. Additionally, the rich Hispanic heritage all over Texas reminded Ben’s family of Peru so “it wasn’t a complete break” from their former life in Latin America. His family still holds onto their strong Peruvian identity, speaking mostly Spanish at home and returning to Peru often.

Today, Benjamin Tebbe has become inspired to use his bilingual abilities to translate for missionary doctors in Peru and is now on the pre-med track. Ben and his family currently live in Texas, and he will graduate with a B.S. in Biology in 2021 from LeTourneau University. As a member of the Joint Admission Medical Program (prestigious Texan program helping students realize their goals of becoming physicians), he plans to attend medical school somewhere in Texas. His parents work at a Bible College teaching classes and serving where needed. His younger brother, and only sibling, is finishing high-school and is an avid hunter and fisherman. Ben and his family continue to share their panoramic, promontory worldviews with Texans and Peruvians.

Jade Evenstad is a Texas transplant set to graduate from St. Mary’s University in 2021 with a B.S. in Biology and minors in Chemistry and History. She is also part of the Joint Admission Medical Program and met Ben and other admitted students at a Summer I internship at Baylor School of Medicine. Jade plans to earn a medical degree from a Texas medical school and eventually practice in Texas as well. She also hopes to become more involved in history endeavors and is grateful for opportunities to encounter diverse worldviews.