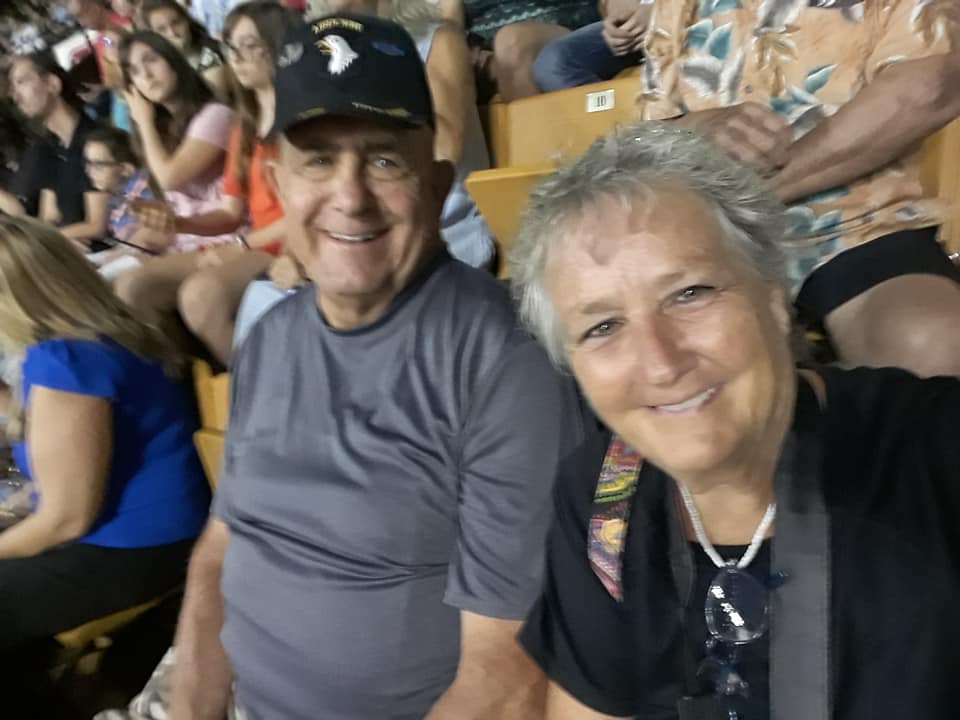 Share
This is Jacque and her high school sweetheart, Michael Smith. They have recently just celebrated their 54th year of marriage and still are going strong.

Jacque Smith was born in a very small town outside of Amarillo, Texas called Fritch, Texas. At that time, which was around 1952, Fritch had a population of around 2,000 people. She was born to Barbra Trent and Clinton Trent, along with one brother, Buddy. In Fritch, Texas there really is nothing to do at all except to pick in the cotton fields or tend to the animals on the farm. Jacque learned that on the farm, there is no time for laziness. There is always something that needs to be done, whether it is milking the cows, brushing the horses, collecting the chicken eggs, feeding the pigs, or getting hay for them to eat. There is never a time to just sit around because other lives are depending on you.

When Jacque was 14, she and her family moved to another small town outside of Amarillo, Texas. They moved to Borger, Texas which had a population of 12,754 people. This was a slightly bigger town, but still small enough that everyone knows just about everyone. Here in Borger, her family opened up a gift shop which also had a mechanic shop connected to it. This was a place where you could get a nice-scented candle and also get a new air filter for your car. Jacque’s mom ran the gift shop side and Jacque’s dad ran the mechanic side. Jacque also worked here all through high school. She learned the responsibilities of having a job and how to keep it. Her parents warned her that it doesn’t matter if she is their kid, she will be treated like any other employee and get the same consequences. This taught her that she should never be late to things, treat older people with respect and the most important thing, the customer is always right.

At the young age of 20, Jacque got married to her high school sweetheart and quarterback of the Borger High School football team, Michael Smith. They went to the same college to stay close together and bask in romance. Both finished college, Jacque with a nursing degree and Michael with a mechanical engineering degree.

All through her life, her mother and father taught her all about self-respect and morals, and how a Texas woman should carry herself: shoulders up, chest out, have confidence, trust in the Lord and never back down for anyone. This is how Jacque landed her first job at Northwest Texas Hospital in Amarillo, Texas.

She and her newlywed husband packed their stuff and headed to the big city of Amarillo, Texas which had a population of 127,010. There, they had three children, Matt, Tiffany, and Robbyn. Jacque remembered the way that she was brought up by her parents and wanted to do the same for her children. She wanted to teach them respect, courtesy, and, most importantly, manners. This means her oldest, Matt, will always open the car doors for his two sisters every time they get in the car, no matter how old they are or if they are mad at one another. This also means that Tiffany and Robbyn would help her tend to their family garden and help cook dinner with her every night.

Jacque Smith is the typical West Texas girl. She knows respect and how to give it to people, she is a hard worker and never gives up no matter how many people try to bring her down. She is the definition of Texas-Born and Texas-Raised

Rylee Hopper is a Forensic Science Biology major and wants to go into the medical field for forensic science. She had 3 sisters and one brother and is the middle child of five. She lives in New Braunfels, Texas and every day of the summer you will see her floating the river with her Great Dane, Millie.

Eric Delgado All Over Texas, All Over the World, and Back Home Again
Anna Lee Texas Longhorns and Crocodile Boots
Jayson Folsom From Costa Rica to the Crystal
See All Stories »