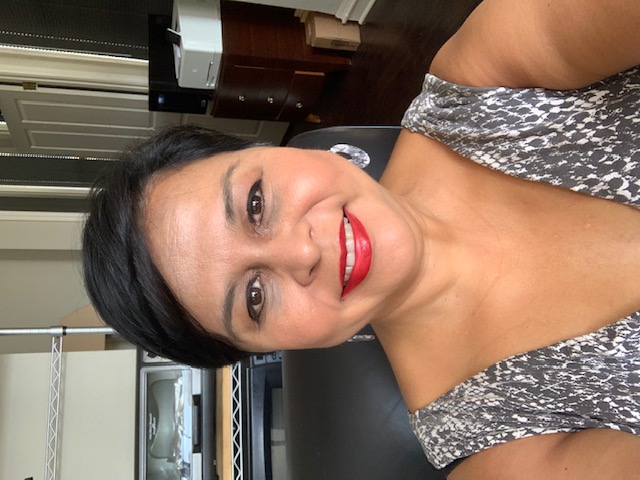 “I didn’t know I was from the country until I left and came back” said Michelle Vasquez. She grew up in Uvalde, Texas which only had seven stop lights throughout the whole town. Her family owned a Mexican restaurant named Vasquez at which she worked throughout her childhood. She has an older sister named Patty and a younger brother named David. She is the middle child so she felt her role was to make sure everyone’s happy. She still does that today at her job as a marketing specialist. Whenever there are any disagreements between her coworkers she acts as the mediator. Her childhood consisted of using her imagination to entertain herself. She would read any genre of books whenever she could. She loved escaping into their exciting and colorful worlds and would dream about what it would be like to live elsewhere.

When she was in high school she was involved in every club there was and she even entered in contests that gave vacations as a prize. But she did not join in any sports because as she said “I'm not athletic.” She was very outgoing and made friends wherever she went. She met various people throughout her contests and they became her penpals. She lived vicariously through them as she got bored in Uvalde with doing the same things over and over again. At the age of 16, she was approached by a friend from church named Jane Chavez. She asked her where she was applying to college or where she wanted to go. Michelle was at the top of her class but she hadn't even considered leaving Texas! Jane then asked her about Stanford but Michelle hadn't even heard of it. Taking Jane’s advice, that summer Michelle went to the exclusive Andover Prep School all the way in Massachusetts. To her surprise she discovered that all of her new summer classmates came from prestigious high schools which made Michelle feel out of place being from a small Texas public school. That summer she had to work and study harder than ever to do well. Andover Prep was her first step to getting into Stanford. Since she was involved in basically anything but sports at her school, she was at the top of her class, plus she attended a prestigious summer school. Ultimately, she got into Stanford.

When she left for Stanford, she had never even toured the campus! As an 18-year-old, she left her hometown all by herself. She flew alone to San Francisco and took a bus to Palo Alto, to land at a brand-new place. She said everything was exciting and scary. She was especially excited to make new friends. Her favorite things were “the Oval” (a patch of always freshly-cut green grass where people would hangout), the new people, and the discovery of a new and interesting world. She majored in political science because it was the only major that allowed her to graduate in four years. There, they didn’t have to declare a major until junior year. They just took classes that interested them through their freshmen and sophomore years. During her time there, she was able to unite with her friends whom she had met at Andover Prep. She also met her husband. She took every opportunity to shape her future which included going to every “Brown Bag Lunch.'’ They were where people from various businesses would come to talk and to meet the students who were at those events. She even went when she was an underclassman and those events were meant for upperclassmen. Through those lunches, ultimately she got a job in New York City.

After graduation, she moved to the crowded city of New York with her new husband. There they lived for a few years until her husband became ill and was diagnosed with a brain tumor. He had it removed and all was well. He even went back to Stanford to get his graduate degree. She moved to New Jersey for a new job and to pay for his schooling. Afterwards she moved to San Francisco to be with her husband. Sadly, he again got sick. The tumor was back. Treatment included chemo and radiation but the battle was tough. He had a stroke which paralyzed the whole right side of his body. Michelle helped him through relearning how to walk by hearing for his right foot to hit the ground because he couldn't feel it. Inevitably, he passed away after the stroke and all the cancer coursing through his body.

Michelle decided to move back to New York. But it wasn’t the same. After a few years, she ultimately returned to her hometown of Uvalde to help her aging parents. Driving back and seeing all the pigs, chickens, horses, enormous fields of corn, and a sign that read “Jewelry and Guns” is when she discovered she grew up in the country. She spent the next few years in her country town helping at the family restaurant, reconnecting with family and friends and embracing her roots. Eventually her parents passed, at that point she moved to San Antonio. She said “It would take a lot for me to leave Texas, something incredible would have to happen to make me want to leave home.” She compared the places in which she lived: Uvalde was boring and country but had lots of love and was where her family lived, Stanford was incredible and new, New York and New Jersey were artsy, busy, and lonely, San Francisco was inclusive, and lastly San Antonio and Texas is friendly, happy, and home. She has decided to stay and to enjoy life at home.

Mackenna Bittle is a sophomore attending St. Mary’s University where she is majoring in Biochemistry. She is a member of the American Chemical Society of Students. She has lived in Lakehills, Texas her whole life and hopes to become a pharmacist when she graduates.