My Grandfather, The Cowboy 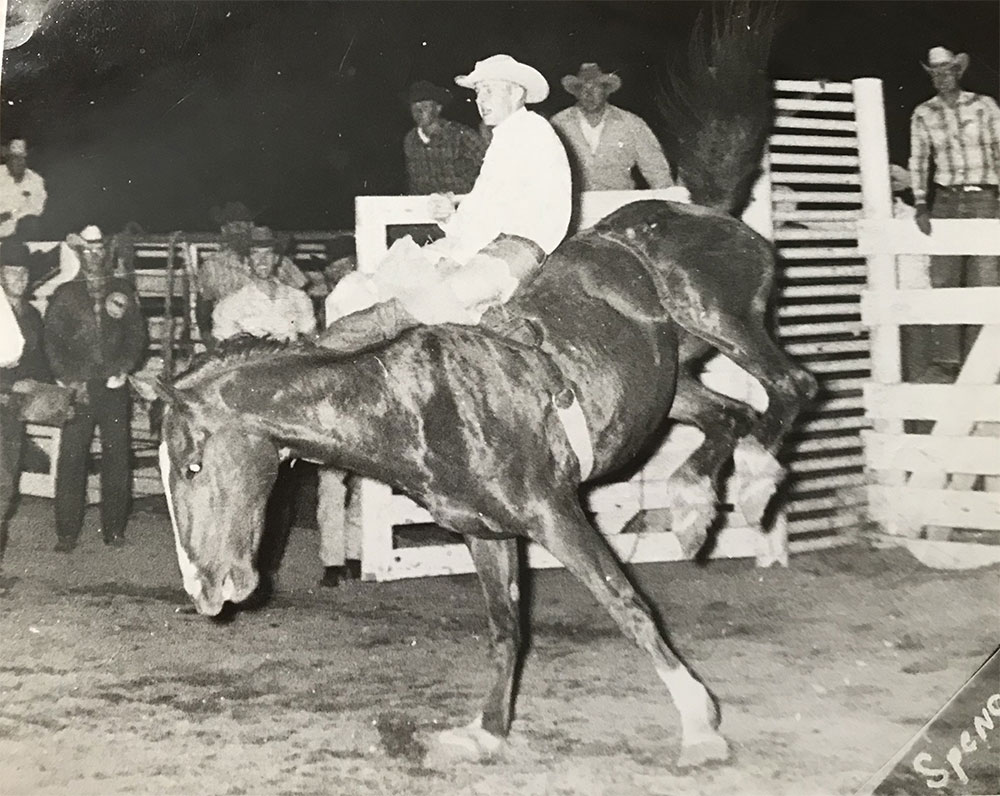 My grandfather, Earl Harry Childs, started working for the US Cattle Company in 1952, when he was only twelve years old. He earned $5 per day, which was a lot of money, even if you’re only working summers and weekends. He worked there with his father, for a man named Mr. Weaver. His job was to gather the cattle in the ranch. Sometimes he would also be tasked with gathering the sheep in the morning so that they could be sheared by the afternoon.

The man who owned the ranch was B.B Dunbar. He was also in charge of 17 other ranches at the time, making him the largest ranch owner in Texas and was worth an estimated $45 million dollars. At the ranch itself, the workers stayed in camps of roughly ten people, plus a cook and a bookkeeper, who handled finances. They worked throughout the week and went into town during the weekend. They could stay in town as long as they felt but then had to be back to work on Monday morning. He continued to work like this for about ten years.

He graduated from high school in 1958, and then went to community college for two years. Then he finished his last two years of college at Sul Ross State University, in Alpine Texas, with a major in Animal Husbandry and a minor in Biology. He was just one class short of being able to double major in Biology but was not informed of this at the time. Shortly after this, he quit work with the US Cattle Company due to the fact that his boss had unrealistic expectations and overloaded his position to the point that he could not keep up with his boss’ demands. Unfortunately, one year after he quit, the owner, Mr. Dunbar, died. Had my grandfather not quit earlier, there would have been the possibility that he would have been left a ranch when the owner died, but it is impossible to know for sure.

In 1963, he went to work for the Fruit and Vegetable Inspection Service. Six months out of the year, he would inspect peanuts, then he would travel to Laredo, Tx to inspect other vegetables like onions. However, moving produce on trains wasn’t very efficient, so they started putting it on trucks and shipping it straight through the valley, so he soon moved down south to follow the work. After just 5 years he reached the position of Supervisor and traveled to both Chicago and California to be trained on how to teach people to inspect the produce. During this time, he also rode bareback horses in multiple rodeos, including ones in Sul Ross, Laredo, and Uvalde. Also, during this time, the company changed hands, resulting in a deduction of total years’ work record.

After going to training, he proceeded to teach schools on the different types of produce and even taught a few college classes in Livestock Judging and Farm Animal Anatomy. Due to his experience, he was invited to host many seminars in his field of work all over Texas and even in Mexico. He worked for the Fruit and Vegetable Inspection Service for a total of 36 years, until he retired in 2002. Overall, he enjoyed his career, however, looking back on it, he would have rather had chosen to stay on the ranch where he enjoyed working the most. Now he spends his time relaxing and playing golf in San Antonio, Texas.

Zane Cobb is a student a St. Mary’s University in San Antonio, Texas. He is currently a Psychology Major. When not at school, Zane is either working on his project car, longboarding or hanging out with his friends.