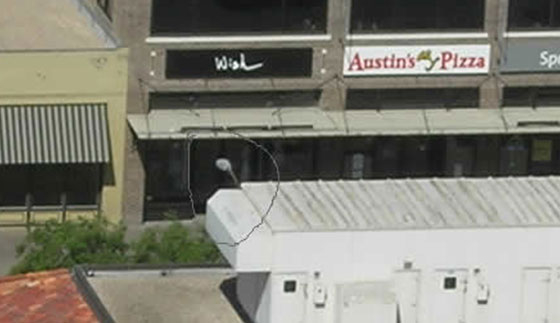 Share
Photo taken by Forrest Preece in 2007 from the deck of the UT Tower. The viewpoint is that of the sniper and the circle indicates Preece's location on August 1, 1966.

I understand that there is a course at UT now about perception of the incident and the image of the tower in public memory. Yet, the fact is, I cannot even get a glimpse of the Tower without the memory of that day flooding over me. As a lifelong Austin resident, I resent this fact.

My whole childhood, I was full of the expectation of one day being a University of Texas student and enjoying my classes there. Before the incident, the Tower was a symbol of hope and aspiration for me. But ever since 8-1-66, I can't get anywhere close to campus without thinking about the choice the gunman made to shoot Harry Walchuk and not me or one of my pals who were standing by me. Once, my mother told me that as she was laying there in her hospital room after giving me birth at the old Seton Hospital (26th and Rio Grande), she mused that her son was born in the shadow of the UT Tower. How ironic that the existence of that tower almost cost me my life twenty years later.

Style point— I refuse to type the sniper's name.

Has this experience affected my life? Yes. Scarcely a day goes by when I don't think about the incident. It's also made me appreciate what I was given through sheer luck that day— a second chance to get out there and make something out of myself. All I know is that the randomness of the universe landed in my favor that day.

I shot the photograph shown here on April 1, 2007 from the west side of the University of Texas tower's observation deck. This was the first time I had visited the deck since prior to August 1, 1966, when a sniper rained down a withering fire of bullets from the vantage point shown in this photo. The white air conditioning unit on the roof in middle of this photograph probably saved my life. On August 1st, 1966 at 11:55 a.m., along with two of my Longhorn Band friends, I was standing on the sidewalk just under the black sign with white letters that reads Wish. In 1966, the entire ground level area under the signs Wish and Austin's Pizza in the photograph was one large drug store/soda fountain-cafe called Renfro's Rexall Drug Store. This is where I met my pals for lunch every school day that semester.

Every year, when August approaches, I start trying to forget the thing, but as any rational person knows, when you try to forget something, you just end up thinking about it more. That day started out in the midst of one of the better times of my life. I had just turned twenty and I was in a couple of interesting summer school classes. Another football season was coming up and I was looking forward to what I knew would be my last year playing in the Longhorn Band. To top things off, I had just been told that I had been accepted for a plum job in the advertising department at the University Co-op. In short, I was on top of the world.

My daily schedule that year included meeting two of my band buddies for lunch at the Rexall Drug Store on the Drag (Guadalupe Street), right across from the Student Union Building at 11:20 or so. We'd sit there in the soda fountain, have burgers and solve the problems of the world. Then at 11:45 or so, we'd split for our afternoon classes. I tried to time things so I'd be in the middle of the Main Mall at 11:50, because I knew that a girl I was interested in would be coming the opposite way at that time. For some reason our lunch conversation went on longer than usual that day. When we walked up to the cash register to pay, the cashier told us, "You guys better not go out there. Somebody's shooting a gun." Of course, our reaction was, "Oh yeah, right."

After absorbing that admonition, we barged right out the door anyway and stood there in front of the drug store looking south down the Drag. Then we heard a rapid succession of snaps in the distance. To be honest, they were so faint that we instantly agreed that they were firecrackers. Just then, an earsplitting cracking sound rang out and I felt a rush of something violent going past my right ear. I am not exaggerating when I say that I almost felt the shot's heat. Then a woman let out a B-movie scream. Instantly, we scurried back inside the drug store. That ear-splitting shot that we heard was the one that took the life of Harry Walchuk, a 38-year old veteran with six children. He had been standing in the entrance of this little hole-in-the-wall newsstand right by the drug store, asking about a magazine, making a stationary target.

The gunman had started by storming the Tower, killing and wounding some people in the winding stairwell at the top after shooting the attendant woman at the desk on the observation deck landing. After he got set up, he began the spree at 11:48 by shooting everyone he could see. In the process of his rampage, he killed 16 people and wounded 31.

By the time noon rolled around and after we had turned on several radios inside the drug store, we were able to figure out what the heck was going on, though we didn't know if there was more than one person up there. Suddenly, this little group of about twenty of us, counting customers and employees, who were stuck in the store were a community of our own, wondering when this would be over, turning on radios, trying to make sense of it all. The cosmetics saleslady and I crouched behind her counter and watched the shots hitting the tower for about five minutes. She said, "Look, you can see the puffs of smoke." Later, I realized that the puffs we saw were actually shots that were directed at the sniper from people firing back.

Paul Bolton, the dean of the Austin news establishment, was anchoring the radio newscast. He had Joe Roddy at Brackenridge Hospital and Neal Spelce on campus with Red Rover, the mobile news unit. They started reading the names of the dead as they were taken to Brackenridge Hospital. At one point, Roddy was reading more names of dead from Brackenridge and he said, "Paul Sonntag." Bolton interrupted and said something like, "Joe, read that one back to me. Did you say Paul Sonntag? That's my grandson." And it was.

Towards the end, it sounded like a free-fire battle zone outside. It was like half the people in town with a deer rifle showed up and started wailing away. Somehow, when it was over, we knew it. Neal Spelce said over the radio that the shooting had quit. Suddenly, all the stores emptied. No one was saying anything. What seemed like five hundred people or so, just moving in one direction, not saying a word. As we swept east on the West Mall, a weird tableau of three men parted us like the Red Sea. In the middle was a policeman (Martinez), his uniform soaked through and his teeth chattering. Holding him up on his left was an older man and on his right was a taller APD officer. Later I learned that APD Officer Houston McCoy had actually fired the fatal shots with his shotgun after Martinez had emptied his revolver at the sniper. The older gentleman was whispering soothing words to Martinez as they walked past. "You did OK, buddy, ease up. You did OK. It's all right. It's OK."

When I got to the Main Mall, the scene that greeted me was pretty awful. I'll spare you the details. I ran around to the west side of the Main building, in time to see them bringing out a stretcher carrying a boy who had been shot in the tower stairwell. He was horribly wounded. (Turns out, all this was being filmed for the news. Darned if they didn't play this clip thirty years later on a local TV station and I saw my 20-year-old-self, standing there watching and stunned, along with about fifty other people.)

Then, I guess some sort of delayed shock set in and I went on southeast to the BEB (business and economics building) to see if we were going to have class. In retrospect, I know that sounds idiotic, but I guess my mind was struggling to put things to rights so intensely that I was doing something that was seemingly stupid. I just wanted my marketing class to reappear and my classmates to show up so we could be normal-feeling people again. Actually, one other guy did the same thing. We stayed there for a few minutes and then it sank in how foolish we were being, so we just split.

I honestly feel like I was spared death twice that day. But was I any luckier than anyone else? Heck, there were thousands of stories like mine that day. One guy in my marketing class told me that he had a habit of sitting at one of those stone benches on the south edge of the Main Mall every day to eat a sack lunch at 11:45. That one day, he'd run out of sandwich bread and ate somewhere else instead.

What's random and what's calculated? Who knows. All you can do is try to keep the odds in your favor by doing as many of the right things as you can.

Forrest Preece is a retired advertising agency owner and an Austin native. As a UT student, he was a member of the Longhorn Band and wrote for the student newspaper, The Daily Texan.