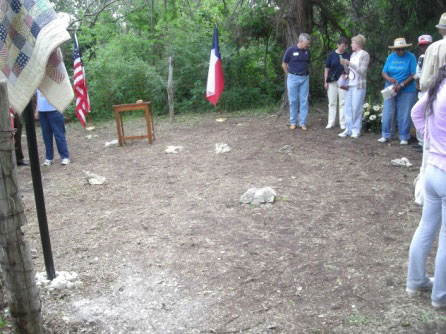 I was among several members of the newly founded Cedar Hill Genealogical Society present with many others from Cedar Hill on April 29, 2012 when our mayor officially placed the Historic Texas Cemetery marker at the site of Crawford’s Tornado Graveyard. We realized that although there were histories of the event, there were still lots of opportunities to delve deeper.

The existing stories surrounding the 1956 tornado that nearly wiped out the town didn’t include information about the size of the town or the victim's names. The stories said the tornado destroyed all but one building, but none said how many buildings there were before the storm. The stories only sort of named the victims. The newspaper accounts only gave the husband’s last name. Wives and children had no names at all!

Any genealogist worth the name can’t pass up an opportunity to solve a puzzle like this! We started a project to identify those lot and those who survived. We also wanted learn who were their ancestors, their descendants, and, for those who were lost, their surviving family. The hope was to find living descendants who may have family stories to tell or who never learned what happened to the family members who moved to Texas over 150 years ago. If we found enough, we would publish a book as a fundraiser. In 2016, we’ll release the book in conjunction with the 160th anniversary of the event.

The Cedar Hill Historical Society had published a book a dozen years ago that gave us some detail about the town before the storm. This book, along with newspaper stories from the time and our own research provided this more complete story:

In April 1856, Cedar Hill was a ten-year-old town that served an area of over 400 people.  About four o’clock Tuesday, April 29th, 1856, a tornado formed about a mile southwest of town, carved a path of destruction 100 yards wide through the town square, and headed northeast roughly paralleling present day U.S. Highway 67 before exhausting itself in southeastern Dallas.  Only one building remained standing and nine people were dead and twelve were injured.

Killed were James L. and America Hart Berry and their infant child, John C. and Nancy Lowe Hart and their infant child, John B. Dickson, Martha Lamar Allen, and a “Negro woman.” Many of the dead are buried in the meadow just north of where the Methodist church had stood. On August 13th, 1856, Robert Crawford deeded four acres of land containing these graves to the trustees of the Methodist church “for the purpose of a graveyard to the public indiscriminately for burying their dead.” We have not found records of any further burials in the Crawford Tornado Graveyard.

Dave Klauck is the designated writer of the Cedar Hill Tornado Project Team.