Going to the Library with My Grandfather 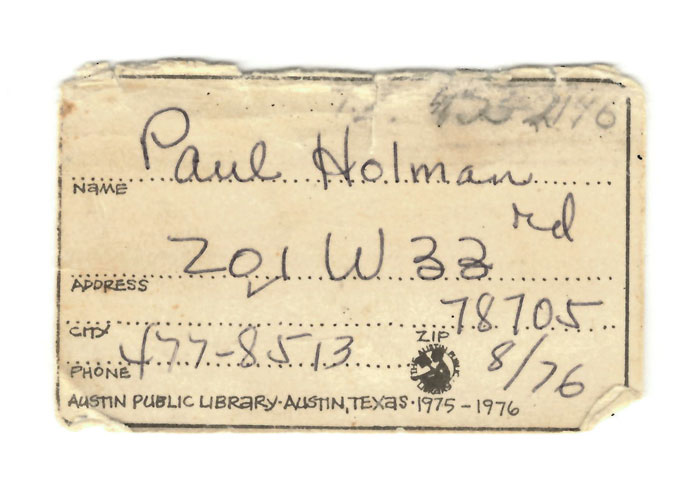 This is my library card from 1975, when the Austin Public Library was located at 810 Guadalupe Street, what is now the Austin History Center. I lived with my grandparents growing up, and my grandfather would take me to the library once or twice a month. The children's section was in the basement, and every time I visit the history center, I look down those stairs, and the memories come floating back.

When the current main library opened in 1979, it was sleek and modern but sterile. The children's section was not as inviting as in the old library. One wanted to linger at the old library, stretch out on the carpeted floor, and read. The new library invited you to check out your books and go home. The new library cards were plastic with UPC symbols, and the card catalog was on computer. Consequently, my grandfather and I went to the library less and less frequently.

A few years ago, after my grandfather passed away, we were cleaning out his desk, and I found my old library card. Grandpa had written some phone numbers on it, notably that of Lonn Taylor, the historian and director of the Ima Hogg Collection at Winedale at that time.

The library card is a little worse for wear and so am I, but it’s a nice portal to a simpler time and the special relationship I had with my grandfather, Henry Holman.