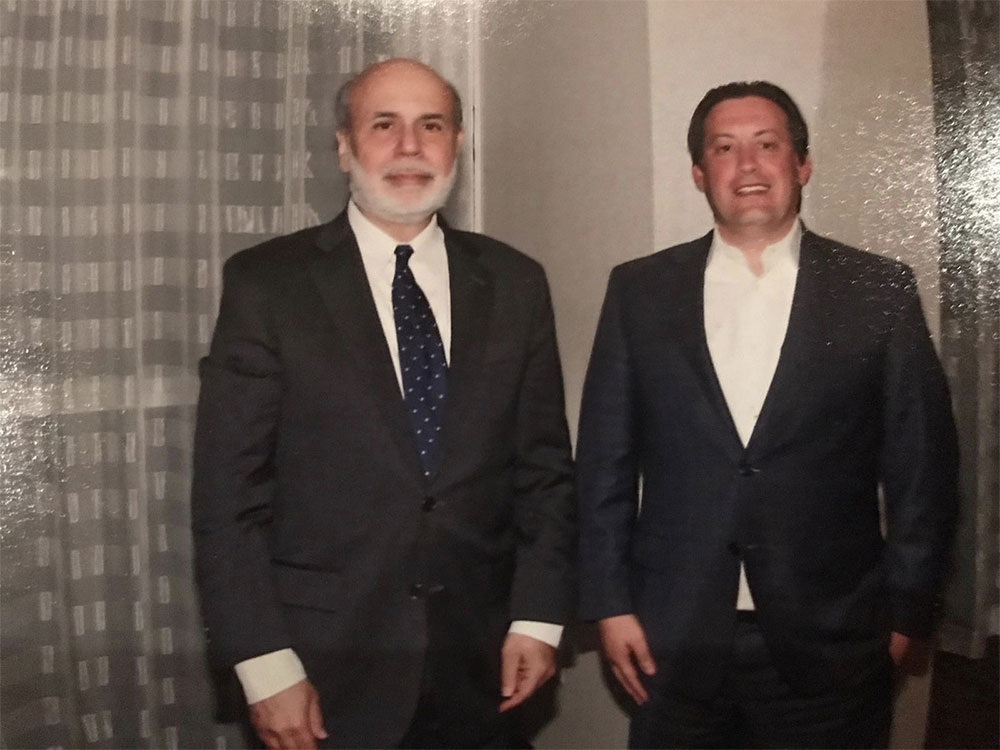 “I’m going to live the American dream,” my mother’s younger cousin, Fernando, used to say when he was little, and he would spend the week at her house to go to school in the border town of Brownsville, Texas. His family lived in Matamoros, the Mexican town right across the border. He was born in Brownsville, so my grandfather was his legal guardian, so he could attend school in Brownsville.

This little boy, determined to live the American dream one day, knew since a young age exactly what he wanted. Fernando was very studious and earned good grades in school. He enjoyed playing chess and competed in chess tournaments. Stories like his are like the one featured in the movie Endgame, which is based on the struggles of chess players precisely in Brownsville, Texas. He also went on to compete in the national Spelling Bee while he was in Russell Elementary, part of Brownsville ISD. My mom remembers him studying his spelling words on his makeshift bed of blankets between my mom’s and her sister’s twin beds, which is where he would sleep while at their house.

Even though Fernando spent week days in Brownsville, on the weekends, he would go home to his family. At their house in Matamoros, five boys shared a bedroom with bunkbeds and beds all in one room. His only sister had her own room. When she started working, she remodeled her bedroom to her liking at her own expense. That is just the way things were. Each would fend for themselves to survive. It was a busy household full of people coming and going. Being the youngest of six siblings and surviving the daily hassles was no easy feat. His siblings were relatively older than him and were busy with their own education in Mexico. Fernando was literally the baby of the house. Mom was busy with the duties of the household, and Dad was busy with his business affairs. His older brother did find time to coach him in chess, and his dad would help him study his spelling words. He was a proud father when it came time for Fernando to go to Washington, D.C. to compete in the National Spelling Bee. Although Fermando didn’t win, having risen all the way to Nationals was a great accomplishment for this little boy from Matamoros going to school in Brownsville. He had to learn to fend for himself and be up to par with his siblings. He acted like a little adult because he grew up with adults. The conversations he would hear at his house were adult matters like work, making a living, paying the bills, and so on.

Still, as a young boy listening to all these rules of survival in the adult world, he found a way to be a child. In Matamoros, children become more street smart because it is a different form of life where kids walk alone to the corner store to buy tortillas for the family meal or they go out to play with the neighborhood kids or just any kid they find at the nearby park. My uncle Fernando remembers playing a “cascarita,” a pick-up soccer match, with kids at the park. One certain kid he recalls was “El Chuki.” He says “El Chuki” had the eyes of a serial killer. He saw craziness in his eyes, but he was a good soccer player and often played “cascaritas” with him and the other kids. He never knew what became of “El Chuki,” but his eyes were a life lesson which later became useful in my uncle’s life.

Aside from playing and trying to be a kid, he hung around grownups because that’s who his siblings hung around with, too, since they were older. His mindset was mature for his age. During Spring Break, college students filled the main avenue called Alvaro Obregon of Matamoros. My uncle Fernando lived on First Street which is relatively close to the main avenue. Fernando, hanging around with his friends, would see all the Spring Breakers and notice how much beer they consumed. Now remember, Fernando was like a little adult, so at the young age of 12, he started his first business deal. He went to talk to the owner of a small corner store and convinced him to sell him a box of Corona beer on credit. Yes, the store owner agreed to sell a 12-year-old a box of beer. However, this is Matamoros, a small town where most people know each other, so the store owner must have known his parents and trusted he was going to do what he promised, which was to sell the beer to the Spring Breakers. My uncle Fernando was successful in his first business venture and sold the beer without any problems on the sidewalk of a restaurant on Alvaro Obregon where his parents also knew the owner. He was so successful that he paid off his first box which he had bought on credit and was able to buy another one. And so, it went, during Spring Break, my uncle made a good deal of money selling beer on the sidewalk, next to the restaurant, on Alvaro Obregon. This was only the beginning of his “American dream.”

Later, Fernando went on to finish junior high, and by the time he reached high school, his sister was already working so she managed to pay his tuition at a private school in Brownsville. That way, he didn’t have to live at my mom’s house during the week. Since it was a private school, there were no restrictions on his place of residence. Nevertheless, tuition to St. Joseph Academy was not cheap, and to cross the international bridge every day, the toll was not cheap either. So, Fernando’s mom would sell lunch plates to make money to pay the bridge toll fee every day. One way or another, his sister and his mom managed to pay his private school education because by this time, Fernando’s father had passed away.

While in high school, and a senior in 1996, Fernando and another cousin of his and of my mom, named Carlos, came across an employment opportunity. It was an opportunity to work as vendors during the Summer Olympic games of 1996 in Atlanta. Neither of them had the means to travel by plane, so these two boys set off on a road trip to Atlanta. When they got there, the person who had taken them left and continued his trip. Fernando and Carlos were in for a big surprise when they discovered a lot of other high school kids from across the United States were outside the business that had offered them all jobs as vendors. It turned out that the business, called Creative Travel, Inc. had run out of money to pay the kids they had hired. As a result, Fernando and Carlos, along with all the others were left stranded in Atlanta very far away from their homes and without money or shelter. Fernando managed to speak to the person in charge and negotiated getting a hotel room for him and all the others, kind of like when he negotiated the beer box back in Matamoros. However, that was a place to stay for just one night. They had that short time to figure out what to do. All the other kids managed to get plane tickets from their families to fly back home except Fernando and Carlos. They didn’t have money to fly there, much less money to fly back home.

When they called home, their mothers in their anguish reached out for help. Carlos’ mother knew a friend who had a sister who lived in Atlanta, and immediately she called her. The sister of the friend immediately offered her home for the boys to stay while they worked at an acquaintance’s art gallery who needed extra help during the summer. This is how they made money to fly back home to Brownsville. However, they did not only make money. While working at the art gallery, which was officially licensed to sell Olympic artwork, they were able to meet Florence Griffith Joyner and Al Joyner. They were given tickets from the art gallery owner and his friends to volleyball games, baseball games, and even a Dream Team basketball game. What started as a nightmare for the boys ended as a dream come true for any teenager. Fortunately, by the end of the summer, Fernando and Carlos made it back to Brownsville. They didn’t get to work as vendors as was promised, but they got to work in the art gallery where they made life long memories to share with their kids one day and with their nephews and nieces like me.

Already back in Brownsville, this young man with his “American dream” still in mind ventured on to his next journey in life. With the help of my grandfather, who had been his legal guardian, they filled out financial aid forms and Fernando applied to be a National Coca-Cola Scholar and a Hoover Foundation Scholar so he could attend Harvard University which had been his lifelong dream. Sure enough, Fernando managed to be admitted at Harvard University. That young man who never let adversity get in the way of his dreams was fulfilling another one, just as he had planned. Not being able to go home as much as he wanted, he sacrificed comforts while being away from home in order to achieve his goal. There, he graduated Cum Laude with a Bachelor of Arts degree in Economics.

From Harvard University, the young Fernando De Leon started his first job as an analyst at Goldman, Sachs & Co. in New York. Today, Fernando De Leon is the founder and CEO of Leon Capital Group, a real estate and investment firm with approximately $2.5 billion in assets. He serves on the board of many of the company’s portfolio companies, as well as the Harvard Interviewing Committee and the Dallas Assembly. Fernando De Leon and his wife Patricia oversee the De Leon Family Foundation, whose efforts are focused on education and food supplies in South Texas and Northern Mexico.

What makes Fernando De Leon an even more successful person to this day, is that he has always kept a little of Matamoros in his being. He used his knowledge of people like “El Chuki” who seem good for the game, but very bad for a business deal. He remembers the importance of knowing the right people to fulfill business deals as he did when he was just 12. He doesn’t forget the people who made him. As soon as he was economically able to, he gave his mother the best years of her life up to her last breath. He continues to be grateful to my grandfather and values his help as a father figure as a young child. He encourages all the new generation of nephews and nieces that all is possible in life if you have the courage and the willpower to do it. He is an extraordinary role model, and I am very proud to be his niece. He truly exemplifies the American Dream.

Natalia Ramirez is currently a freshman at St.Mary's University. She is a Biology major, who hopes to use that to enter Nursing school and become a Certified Registered Nurse Anesthetist. Natalia is from Brownsville, Texas. She spends most of her time either studying or doing service to help the community.

Join 89 others and favorite this

Oliver Smith JR. The Onion Strike of 1979
Christian J. Guerrero Come on Give Me A Break: The Life Behind an Unbroken Man
Jackson Ruiz Crossing the Border With(out) Two Missing Persons
See All Stories »