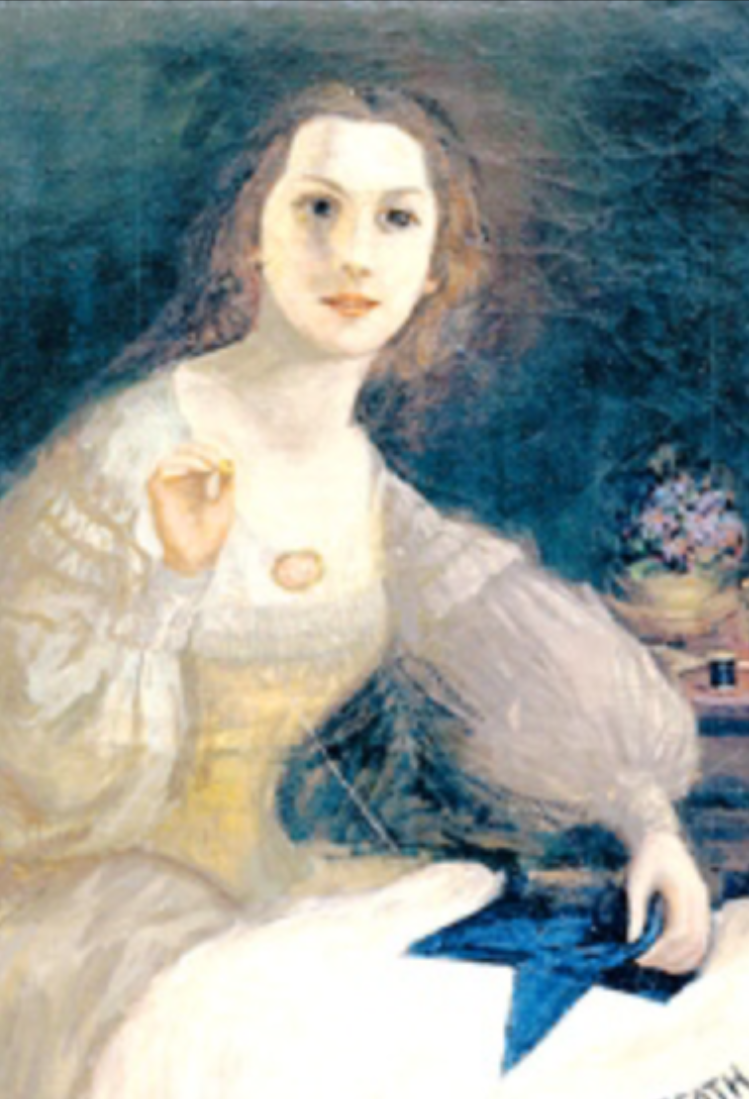 She was a young girl, only 17 when she sewed a flag for her father and other volunteers to carry with them to Texas. They were going to help the Texans fight for their independence from Mexico. The flag they carried had one lone blue star, and the words Liberty or Death were stitched across the white silk background .

During the years that I worked for Austin schools, I often went on walking field trips with students to the Texas State Cementery. This vast landscape dotted with markers of people who had roles in Texas history is a peaceful retreat in our large busy city.  Upon arrival, we always stopped at the visitors center to watch interesting videos of Texas heroes, then with maps in hand, we were off to make our journey through winding paths shaded by groves of heritage live oaks.

One of the most prominent mounuments we visited during any walking tour was that of Joanna Troutman. Sometimes while standing there reading the plaque with a small group of young students, I was proud to tell them that my great great paternal grandmother was Dovie Troutman, of Troutman North Carolina, who is my connection to this ancestor, Joanna Troutman. The town of Troutman, where I grew up, and where Joanna's family has their roots, is named for our ancestor, Johann Jacob Troutman.  He immigrated from Germany with his family and settled in NC in the mid 1700s. Joanna's story is an interesting footnote in the history of this great state; but, for many of us proud Texans, our story may not be documented on a plaque for others to read. Our story may be a simple legacy of working to help our fellow Texans in whatever way we could; but, isn't that the same legacy of every story buried in the Texas State Cemetary?

Many of the volunteers who carried Joanna's flag died fighting for Texas, fighting for a cause they thought was noble. Today, as I look around the cementary at the rows and rows of stone markers, my eyes rest on those of the confederate soldiers.  I feel both pity and fear as I wonder about these tragic heroes. I feel pity that thousands of brave young Texans left their homes and families and sacrificed their lives for a cause they thought was noble; yet all the while they had been misled. Their tragic sacrifice was less than noble, it was an era in judgement. The fear that haunts me when I gaze on these rows and rows of tragic heroes is that it keeps happening again and again.

Today the Lonestar Flag flies over a state that is still divided by many of the same conflicts that led to these graves that represent every aspect of human tragedy; but, look closely.  That lone star on our flag is not alone. It is the collective spirit of every Texan who aspires to work together to keep our state whole and strong. Together, our stories will echo through the annals of Texas Time.

Joyce Murdock Feilke served the children of Texas as a school counselor for 38 years until she retired in 2014. She grew up in North Carolina and graduated with a BS Degree in Education and English from Appalachian State Univeristy in Boone, NC. After getting married and moving to Texas, she attended University of North Texas where she received her Masters Degree in Counseling and Psychology. Today Joyce writes children's books which are based on original stories she wrote for her young students during her work in Texas schools.  Some of her books are sold in local book shops in Austin.

Amber Gonzales Why Austin, Texas is Important to Me
Lorena Palacios San Antonio, Texas: a sanctuary for Holocaust survivor Jack Wysoki
Jonathan Isasi A change in culture.
See All Stories »