The Chiming of a Mahogany Clock at Harrington House 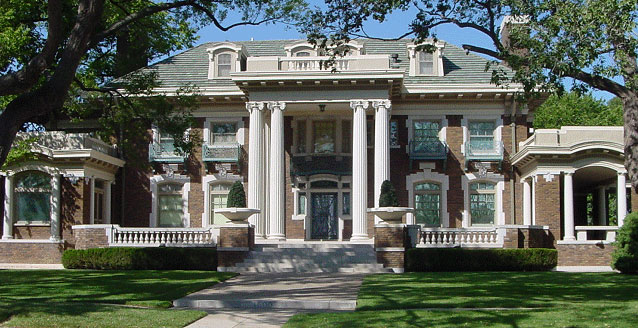 Like many stories, this one could begin, “Once upon a time . . .” This was a time marked by the chiming of a tall mahogany-case clock, signed, Joseph Jennens, Skinner Street, Clerkenwell, London, circa 1880. Brothers Patrick and John Landergin placed the clock in the reception hall of their newly constructed Amarillo home in 1914, and it stands there today.

The sons of Irish immigrants, the Landergin brothers were adventurers. They had come to the rough-and-tumble world that was the Texas Panhandle of the early twentieth century to rebuild the fortune they'd lost in the collapse of the cattle market in Kansas. They leased and eventually purchased about 92,000 acres of ranch land in Oldham County.

John and Pat settled at the old Alamosa Creek headquarters along with Pat’s wife, Mary, their daughter, Alice, and two nieces and a nephew. In 1911, the Landergins bought four lots in the growing town of Amarillo and hired a Kansas City architectural firm to draw plans for a town home.  Construction began in 1913, and the house was occupied in the summer of 1914.  The Neoclassical mansion had over 15,000 square feet of floor space, twenty rooms, eight bathrooms, seven fireplaces, and an Otis elevator to service the four levels. Though Mary Landergin died during the early construction period, her daughter apparently took on lady-of-the-house responsibilities, evidenced by a September 1914 Amarillo Daily News account of a bridal shower for Fanny Fern Masterson given by Miss Alice Landergin in her recently completed home. The mahogany clock probably punctuated the festivity of that party.

Meanwhile, Amarillo residents Frank and Roxy Buckingham welcomed a daughter, Sybil, who was born in October, 1908. The granddaughter of some of the first settlers in the region, young Sybil liked to hunt and fish but also loved music and dance. As a child, she walked by the Landergin home, perhaps on her way to school, and admired its beauty. And just maybe—if the windows and doors were open—she heard the chiming of that clock.

By 1929, all members of the immediate Landergin family were deceased. The house came on the market in 1940, five years after Sybil Buckingham had married Don D. Harrington, who had come to Texas as a landman for Marland Oil Company and shortly thereafter began a highly successful career as an independent oil and gas producer. The Harringtons purchased the Landergin mansion in October, moved in, and entertained on New Year’s Eve, 1940. The clock must have chimed at midnight to mark the beginning of a new life for the house and the couple.

Redecorating and refurbishing occurred over the next years, but there have been no structural changes since the house was built. Don (1898–1974) and Sybil (1908–1998) Harrington lived in the house at 1600 Polk throughout their marriage, though they traveled widely and had a winter home in Phoenix and a New York City apartment. Someone has written, “The Landergin-Harrington house represents the ‘symmetry’ of the two economies—cattle and oil—that have developed the Texas Panhandle, making the story of the house and its owners a vital one to tell.”  And that story is beautifully illustrated everywhere within the mansion’s walls, a fascinating blending of the choices, loves, and treasures of both families.

Though neither sought praise or publicity, Mr. and Mrs. Harrington were sharers of their good fortune. Ralph Waldo Emerson defined philanthropy as “the wish to scatter joy and not pain around us,” and the Harringtons exemplified that wish, supporting worthy projects in education, health and science, social services, and the arts, spreading joy and easing pain both locally and across the country. And Harrington House, placed on the National Register of Historic Places in 1977, is open today because of Mrs. Harrington’s fervent desire to preserve the beauty of the mansion to be enjoyed by the public for years to come. Privately and amply endowed, the home welcomes appreciative visitors on scheduled tours.

Those visitors are sure to hear the chiming of the clock standing in the reception hall, the same tall mahogany-case clock that has marked the passage of a century of the comings and goings of cowboys and oilmen, average folks and celebrities—a century of much laughter and undoubtedly some tears. Visitors will also see, hanging on a wall in the master bedroom, a framed Christmas card sent to the Harringtons by their Dallas friend Everette DeGolyer, a petroleum geologist widely considered the father of American geophysics. It reads, “No steer is so fat as one which scratches his ribs against the legs of an oil derrick,” perfectly capturing the story of a house built with cattle and preserved with petroleum.

And so, like many other stories beginning, “Once upon a time…,” this one ends, “...happily ever after.”

Sue Park is Dean Emerita of the Sybil B. Harrington College of Fine Arts and Humanities at West Texas A&M University. She is also a member of the Board of Directors of Harrington House in Amarillo.