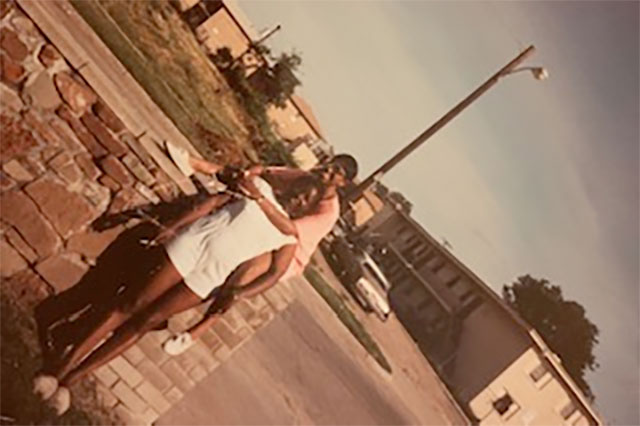 In Dallas, Texas, the poverty rate among African Americans is 30% which is 4.8% higher than the national average. Additionally, the female population of Dallas experiences a 23.8% poverty rate. Sonya Briggs was once a part of these statistics. As a young girl, Sonya lived with her mother in a shoebox apartment on the first floor of a small 20-unit apartment complex in South Dallas that has since been torn down. From the 1970s to the 1990s, Sonya grew up around drug dealers, drunks, and homeless people.

“It was a normal part of my life. They didn’t scare me,” she said with a matter-of-fact and casual manner. She would pass these people on the way to the corner store behind her complex and sometimes even spoke to them. The neighborhood was one of the worst and most underfunded places to live in at the time and it affected Sonya’s education.

“There was no middle school in my neighborhood. The kids from the neighborhood were bussed across town to another school, then bussed back home.” This lasted for three years until she had to attend a different school that offered seventh and eighth grade. As Sonya went through school and got older, she decided she needed a change. She began to dream of a life better than the one she was living.

“The neighborhood just kept getting worse,” she recalled. Sonya’s home had been broken into and everything of value was stolen. In retaliation, her mother had the windows nailed shut. She recounted another incident when some knocked on her door in the middle of the night asking for a “five- cent bag.” Unbeknownst to her what that was, she handed the man a regular paper bag in confusion. The man realized he’d made a mistake and quickly apologized and left. The man was looking for the drug dealers who lived above Sonya’s apartment in the upstairs unit.

“They asked me to be their lookout once,” she said, “They said, ‘The cops wouldn’t suspect a small innocent girl to be our lookout.’” The idea of making some money when you have none sounded good to her but ultimately, she decided against it. She went to tell the dealer no and as she was leaving, the police swarmed in like angry bees and yelled at her to freeze. “I was terrified,” she said, “as the police ran up the stairs to the apartment.” Seeing she wasn’t a threat nor involved in the business going on upstairs, the policeman snapped at her to get in her house. She hurriedly ran in and shut the door.

Because of the things she experienced in her childhood, Sonya swore to herself that she would leave South Dallas and make a better life for herself and future family. She graduated at the top of her class, joined the military to pay for college, graduated with her Master’s, and moved away from home for almost 30 years until five years ago when she moved back to Texas and now resides in San Antonio, Texas. She hasn’t forgotten her experiences or the lessons she’s learned from growing up in South Dallas but recently, she visited the area she had once lived in. The same corner store still stands as though nothing in South Dallas has changed.

Mikayla Briggs is a sophomore attending St. Mary’s University. She is majoring in mathematics with a minor in computer science. She is from San Antonio, Texas and she is the oldest of three children. She has one brother and sister. Mikayla enjoys playing softball at the collegiate level as well as playing the cello in her spare time.