Descalzo en México: The Journey of an Immigrant Child 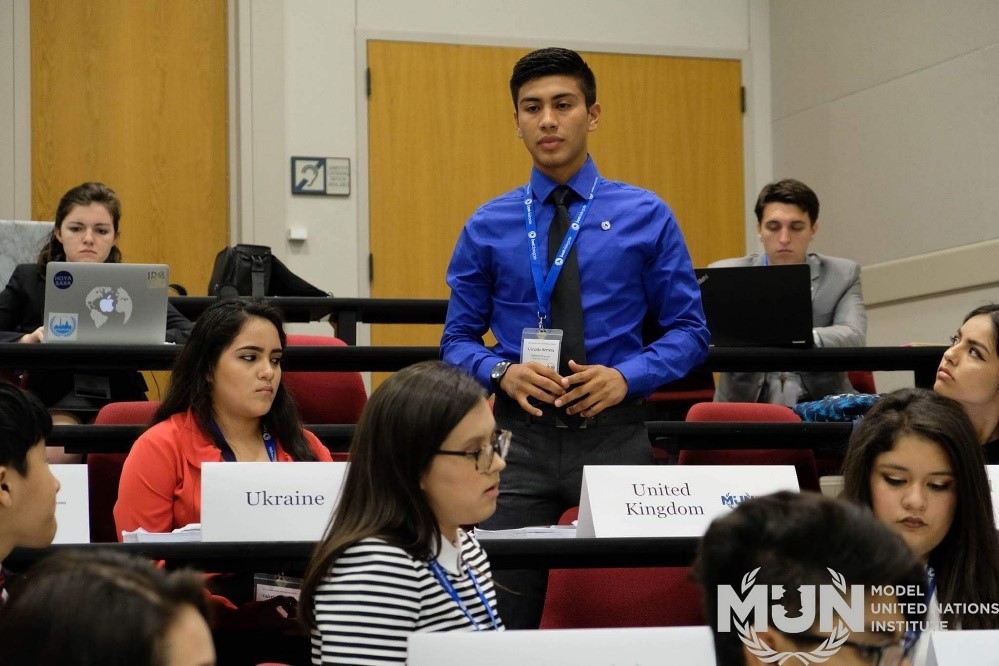 Share
Gerardo Herrera was selected to participate in Model United Nations at Southwestern University in 2017.

Weeks before giving birth, Elizabeth crossed the Rio Grande River in hopes of giving her son, Gerardo Herrera, lifelong opportunities. Pushing through the rapid currents and deep water, she made it to the small town of Edinburg, Texas, where Gerardo Herrera was born on August 5, 2000. A week after his birth, his father, mother, and he returned to Victoria, Mexico.

His mornings were all the same, wake up, and walk to school. He didn’t have much to bring along, but a pencil in his hand. He made it through the day by borrowing papers and finishing his work to be the first out to break. Some days, he was lucky enough to buy a full meal. Other days, he’d eagerly await his mom’s voice calling for him to grab his lunch. When he could spare the extra change, he’d surprise his mom with a chicharron when she’d come around to leave his lunch. His journey after school was different every day. His most memorable moments were running out to the dirt fields with the neighborhood kids for a game of soccer—the goals made of sticks and a ball made of old clothing. His school shoes were his only shoes. He never risked getting them dirty, so he walked the streets barefoot. He never knew about what he didn’t have, but only looked forward to the adventures of another day. Gerardo describes those moments as the foundation of the person he’s become.

After a few years of living in Mexico, his parents once again risked their lives crossing the Rio Grande river. They started a new life in Edinburg, Texas, with his Tio Hugo and family. Months later, his family moved to small blue apartments. As the days went by, it kept getting harder to come up with the money for next month’s rent. He and his family continuously moved to cheaper apartments when they couldn’t afford another month of living. It was an ongoing cycle of moving in and out with family members until Gerardo reached junior high. His father found a good-paying job at a hotel and they bought land to start a new chapter.

During the process of building what would be their new home, his family of seven stayed in a small trailer. He recalls the sleepless nights when rats would run across the trailer and often bite his feet. He was cold and scared, waiting for the sunrise to continue working on the house. They moved in without windows, water, or finished walls, but it was enough to get through the night. When the school year was over, he spent his summers working with a bricklaying family company. Every summer since he was 13, he looked the same. He was hot, tired, and hungry. Working from 6 a.m. to 6 p.m., he never gave up the hope of helping his family move forward.

Gerardo knew that the biggest factor that would help his family succeed was earning a better education for a well-paying career. He pushed himself all throughout high school to be able to attend a four-year university. He lists four reasons as to why he chose to dedicate so much time into his education: he knew he was capable of more, he wanted to escape the cycle, he wanted to set an example for his younger siblings, and he no longer wanted to see his family struggle financially.

Having to struggle throughout his whole life, it was almost inevitable that he must work to help support his family. Every summer, he truly saw what hard work looked like. He never complained, but he knew that this wasn’t the life for him. He was an excellent student throughout high school and very hardworking. Living paycheck to paycheck wasn’t the life for him and he wanted to see himself grow personally and financially.

The house he and his family made was in a small neighborhood on the outskirts of Edinburg. These areas tend to be more concentrated with Mexican families, many being immigrants. Around his neighborhood, he saw that there was a pattern in how the children grew up. They would easily get caught up in drugs, drop out of high school, and leave town to work. He wanted out of this cycle and wanted to display a better image to the community. He worked nonstop, determined he would go to and through college—and show others that this pattern doesn’t have to determine their future.

Gerardo says that there was never a person he felt that set a good example for him. He saw how his older brother fell into the cycle and he didn’t want his younger siblings or himself to be next. If no one set an example for him, no one would set an example for his siblings. He chose to be the person to map out a good path for his family. He wants to normalize college for his family so that they can see that hard labor isn’t their only option. A big picture to paint for them is that college is for everyone and they don’t have to limit their possibilities just because of their background.

Lastly, he saw how hard it was for his parents to not be able to give their children all the things they needed or wanted. He knew both of his parents were very hardworking people, but their income wasn’t cutting it for a family of seven. It was hard watching them struggle everyday just to put food on table or clothing on their backs. It was a life that he no longer wanted for his family and a life he didn’t want for himself. This is what motivated him to work continuously towards his dreams and never give up. He knew what hard times looked like so nothing could get in the way of the future he would create for his family and himself.

He worked tremendously hard throughout high school so that when college came around, he was prepared. And so, he was. He is currently finishing off his first year at the University of Texas at San Antonio. He has dreams of pursuing a career as a mechanical engineer to live the life he’s always hoped for. He’s excited to have shown his community that they are just as capable as everyone else who attends college. He feels joy already, but he emphasizes that this is only the beginning of his journey and he still has long way to go.

Aylin Rocillo is 19-year-old St. Mary’s University student, majoring in Sociology. She comes from the beautiful city of Edinburg, located in the southern part of Texas known as the Rio Grande Valley. Her roots are what encourage her long-term goals and what inspired the topic she chose to write this Texas Story Project. She describes the city that she comes from as the reason why she wishes to pursue a career in social work because she has seen the day-to-day struggles within her community.