A Victrola and the Holman House 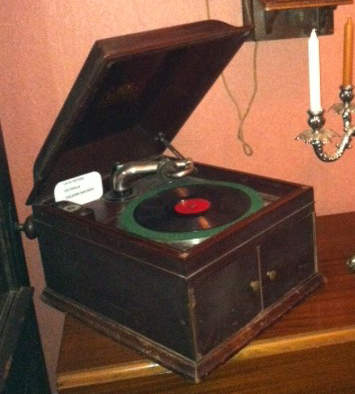 Though many houses in the area are old, and perhaps historic, the Holman House is Pittsburg’s most storied location. The Holman family is remembered for their many contributions to the community, but the house has its own stories. In a corner, at the far end of the entry hallway, sits a 1912 Victrola. Although not a possession of the Holmans, its story includes an interesting set of connections to the family.

John Miller Holman came to Texas from Missouri as a child during the Civil War. At age 14, John ran away from his home near Jefferson and ended up in Pittsburg. He started working in a "Racket Store," where he slept under the counter. Holman prospered in Pittsburg, eventually owning a business that sold hardware and furniture and operated as a funeral parlor and later became a car dealership. All of these operated out of a building built by Holman in 1893.

Prior to building the Holman House, John Miller and his wife Sudie lived in a large Queen Anne Victorian house that he built in 1896. In 1912, the Holmans moved to San Angelo for their daughter Mary’s health. Little Mary soon died of consumption, and the family returned to Pittsburg. Upon returning, Sudie's mother Mary Elizabeth Hill admonished them to not build another of those Victorian castles. Instead, she insisted they model a new home after a Virginia plantation house. The house was completed in 1913.

My wife and I purchased the Holman House, which we operate as a bed and breakfast, in the fall of 2011. Our research of the family has been key to our decoration of the house. The historic Holman House was the scene of many lively social events in the 1910s and 1920s. The Holmans were musicians and music lovers, and often served as the entertainment for their guests. We’ve furnished the house with a 1908 pump organ, but we knew we needed a Victrola to complete the feel. Our search for a working Victrola from the 1910s took us to Rick's Safari Antiques where we found a perfect specimen. (Rick's Safari Antiques has its own Holman connection. It is located in the same building that housed John Miller Holman’s businesses. It also boasts the only operational rope elevator in East Texas.)

The Victrola now resides in the entry hallway, but that’s not where the story ends! It is believed that the Holmans still reside in their beloved mansion. John Miller Holman died in the house in 1925; Sudie died in the same room as Mr. Holman in 1940. My wife and daughters have seen images, believed to be that of John Miller Holman, his wife Sudie and little Mary. I, too, have seen a woman standing in the hallway. Our family and guests have often heard voices and noises. One day, my wife Carla and I were standing in the hallway talking, and we heard a noise near us. We looked at each other with a confounded look, and then to the corner at the end of the hallway. The 1912 Victrola had started all by itself. It played for almost a minute, and then stopped. We both felt that perhaps it was the Holmans just reliving some of their past days at their home.