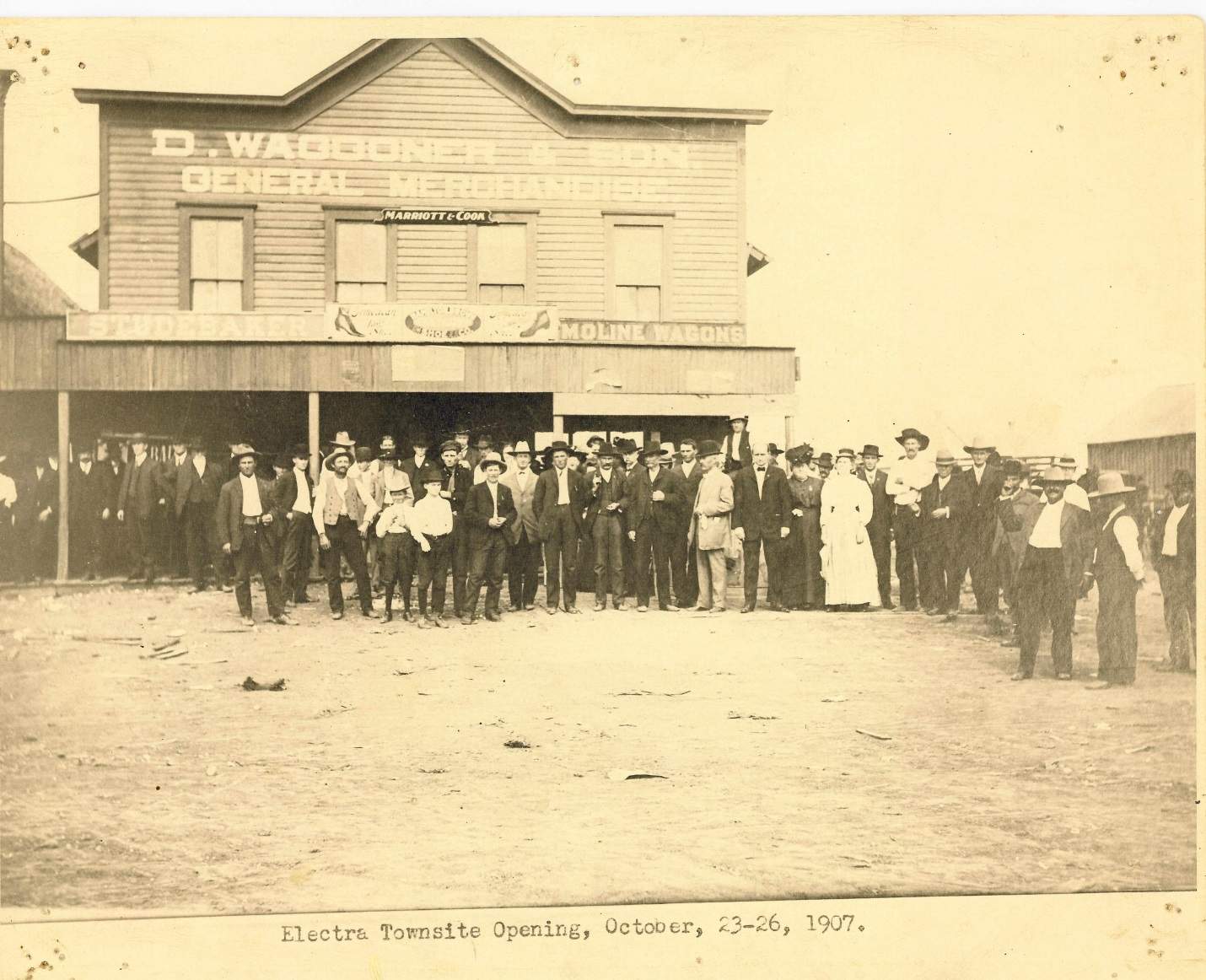 Share
Photo of the Electra Town Site Opening in 1907

As a life-long resident, I think I’ve always known the story of how Electra got its name. The Electra area was built on the cattle empire of W.T. (Tom) Waggoner and formed around railheads used for shipping cattle. In 1902, because of confusion caused by a post office named Beaver and a depot named Waggoner, citizens petitioned to name the little town Electra after Waggoner’s daughter.

Although born of cattle, oil put Electra on the map. W.T. Waggoner, searching for water for his herds, had three wells drilled in the area that would become the town site of Electra. Finding traces of oil rather than water, Waggoner is famously quoted, “Oil, nothing but oil. It’s water I want!” After the wells were abandoned, he sold land for the opening of the Electra town site, an event now celebrated as the town’s beginning. Four years later, the Clayco # 1 oil well blew in about a mile north of Electra and the oil reserves on the vast ranch added to the Waggoner family’s wealth and celebrity and created a real town in Electra.

Although she had a self-professed love for the family estate bordering the town, Electra Waggoner herself never lived in the town that bears her name. However, her nephew, W.T. Waggoner, Jr. and his wife settled in a house built by the family in 1929 on the edge of town. Growing up across the street from the house, my husband had always admired it. In 1971, we purchased the home and have enjoyed having our family grow up in it. Known locally over the years as the Waggoner home, then the Kolp house (after long-time owner Jimmie Kolp, among the first women pilots in the country), and then the Rapp house (after the family who bought it and brought it back from decline), it’s finally becoming known as the Hayers house among the younger folk in town—but only because they don’t know its story.

In the early years of our ownership, we heard many stories about the house from locals who remembered its construction in 1929 and events that followed: how craftsmen set up on site to do the mill and plaster work; how Waggoner Refinery employees with appropriate skills were sent to work on the house; how “Little W.T.,” Tom Waggoner’s grandson named W. T. Waggoner, Jr., and his wife lived in the impressive house before moving to Fort Worth; how Charlie Kolp, a Waggoner Refinery Superintendent, purchased the house from the Waggoner Estate; and how his wife Jimmie lived there many years after his death, developing an airstrip nearby for her own plane, which she flew to business and social events around the country. More than forty years later, we are now the longest owners on record of this wonderful hacienda-style house. While the house ceased to be Waggoner property long ago, it remains our personal tie to the story of the town of Electra.

Jannis Hayers is the Main Street director for the City of Electra.

Join 57 others and favorite this