A Thursday Night in Denton 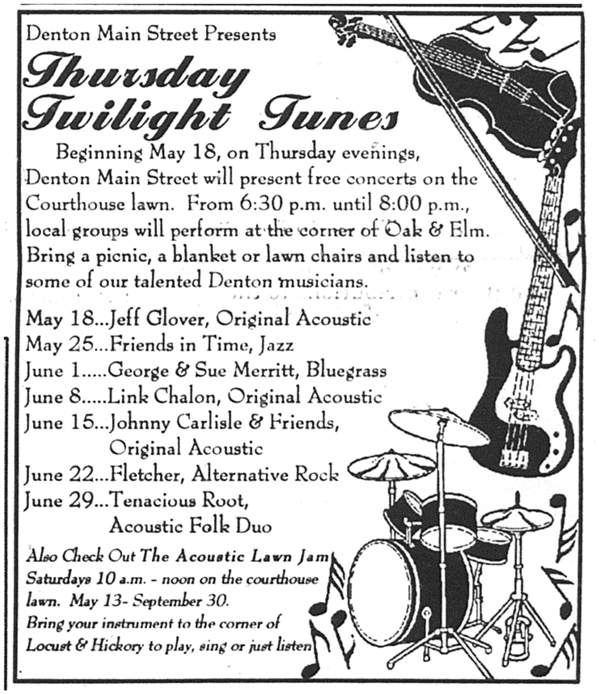 If you end up in Denton’s square on a May or June Thursday night, you’ll see hundreds of people descending upon the courthouse lawn. With lawn chairs, blankets, coolers and food in tow, the town of Denton is ready for Thursday’s Twilight Tunes.

Rewind to 1994. I had just started working for the Denton Main Street Association and was charged with the task of creating new programs that would encourage people to congregate downtown. At that time, Denton had very few live music venues, and the Denton County Courthouse-on-the-Square lawn had plenty of space for a concert. With no budget, we relied on help and generosity from friends and family to perform and produce the show. I called friends (remember no email or social media back then!) and begged, cajoled, and groveled for them to come out and listen. The first year, if there was a crowd of 30 to 40 people, the night was a success.

This 1995 ad from the Denton Record-Chronicle shows the second year’s Tunes line-up. Still running with no budget, the bands and the sound engineer donated their time to help the festival grow. It paid off in 1996, when then-city manager Ted Benevides asked if Main Street had an event that could use a little money.

Over the years, Tunes has continued to grow into a Denton institution. The program is now supported by sponsorships that help to pay for the musicians, production and marketing. In 2013, crowds have grown to about 700 a week, with some weeks seeing crowds close to 1,000. We have seen the effect on the squareof an active downtown, too. When we started Tunes, the square was only 75% occupied. Now, we're at 100% occupancy. Thursday Twilight Tunes has become one of Denton Main Street’s most successful events, and it is music to our ears.

Julie Glover is the Main Street Manager for the City of Denton.