Remains of French ship and rare artifacts on view Aug. 8

AUGUST 6, 2015 (AUSTIN, TX)  — The story of the French ship La Belle was buried in Matagorda Bay for 300 years. On Aug. 8, the remains of the shipwreck, along with rare artifacts, will be on view at the Bullock Texas State History Museum. Reassembled during a seven-month, award-winning exhibition at the Bullock Museum, the hull of the French sailing vessel that sank off the coast of Texas will reopen this week in the museum's permanent galleries.

"The shipwreck La Belle is extraordinary," Bullock Museum Director Dr. Victoria Ramirez said. "The story itself introduces new scholarship to early Texas history and the ship's hull and artifacts are in remarkable shape, especially considering they had been under water for over 300 years. La Belle is one of the oldest and most complete shipwreck's to be on view at a museum. We are honored to have such rare artifacts as the cornerstone of the Bullock Museum's first-floor gallery."

French explorer Robert Cavelier, Sieur de La Salle's ship sank in 1686 and was excavated in the mid-1990s. In October 2014, pieces of the remaining one-third of the ship's hull were transported from the Texas A&M Conservation Research Laboratory in College Station, Texas, to the Bullock Museum in Austin. Archaeologist and guest-curator Dr. Jim Bruseth, La Belle conservator Dr. Peter Fix, and museum staff reassembled the ship over seven months before it was moved in May 2015 to its permanent location. It is now the central artifact that will anchor the interpretation of early Texas history in the Museum's permanent galleries.

"With each new discovery, history changes and La Belle has certainly made our understanding of the region more complete. La Belle also reminds us that it is the small incidents that can have the greatest impact on history. For example, had La Belle survived the storm and La Salle was successful, Texas might be a French-speaking region today," Ramirez said.

La Salle's mission was to establish a colony at the mouth of the Mississippi River when the ship sank near the coast of what is now Texas in 1686.

Approximately 35 of the 400 people who left France with La Salle sailed on La Belle. When it sank in the storm in Matagorda Bay, 27 people were on board. Only six survived.

When La Belle was excavated in 1996, archaeologists found a skeleton resting on a large coil of rope. Several items were found nearby, including a ring that will be displayed for the first time beginning August  8. Visitors will be able to see this and other select artifacts, including bronze canons, muskets, jewelry and brass items comprising a "colony kit."

The reopening of the La Belle exhibition signals completion of one phase of a major renovation of the museum's first floor of permanent galleries.  About 11,000 of the museum's 34,000 square feet of exhibition space was closed in February as part of a $10-million project to reimagine how the early history of Texas is interpreted through exhibitions.

Ralph Appelbaum Associates (RAA), one of the largest museum exhibition design firms in the world, was chosen to develop the design, and the Museum has engaged scholars to research and develop a new interpretive approach that examines the dynamic and complex encounters between the French, Spanish, and regional American Indians, that significantly influenced the course of global history and laid the foundation for Texas's own unique story.

"Installing the La Belle shipwreck meant a complete re-envisioning of the Museum's first floor permanent galleries," Ramirez said. "To most completely and clearly share the significance of La Belle, the gallery will also feature artifacts from early Texas, including the earliest known man-made artifact in the region from the Gault archaeological site in Central Texas. In addition, the first floor space will give in-depth coverage of American Indian cultures and the Spanish presence in Texas."

Once the fully renovated first floor reopens, it will feature hundreds of original artifacts spanning 13,000 years of history and a variety of engaging digital media components that will provide visitors with an in-depth understanding of the story of Texas. The exhibition opening August 8 brings together the 17th-century ship remains, original artifacts, and a 4D film. 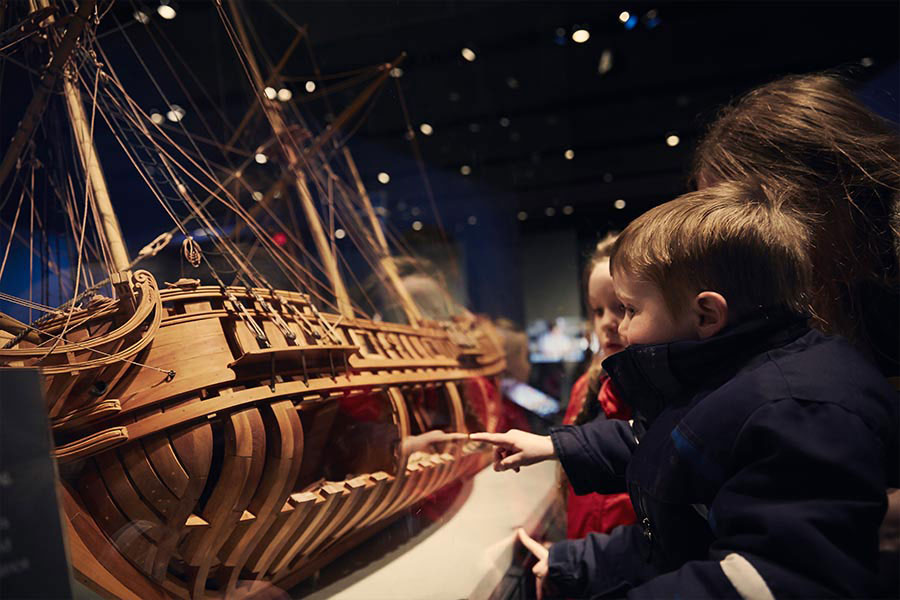 This press release is part of the La Belle: The Ship That Changed History Media Kit

In 1684, French King Louis XIV sent explorer René-Robert Cavelier, Sieur de la Salle, across the ocean with four ships and 400 people to North America. The explorer was to land at the mouth of the Mississippi River, establish a colony and trade routes, and locate Spanish silver mines. That plan was never realized. Instead, in a series of remarkable circumstances, La Salle lost ships to pirates and disaster, sailed past his destination, and was murdered by his own men. View Media Kit