The Book of Ezekiel and the Flying Machine 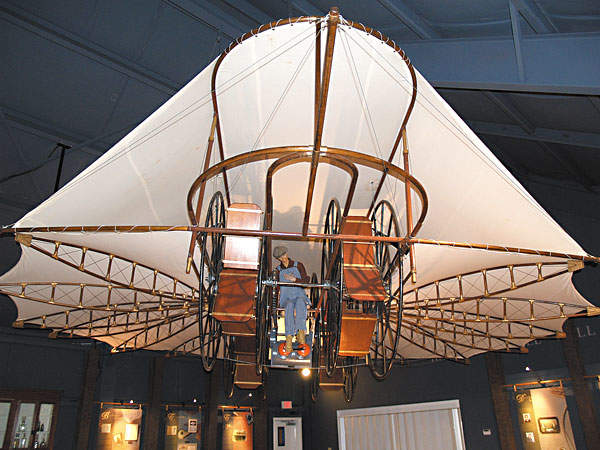 In the late 1800s, many had the desire to fly. In Pittsburg, a small town tucked away in East Texas, Reverend Burrell Cannon’s quest for flight began with a revelation. An inventor, machinist, mechanic, and sawmill operator, Reverend Cannon’s idea for a wheel-within-a-wheel flying machine came from passages from the Book of Ezekiel in the Old Testament : "The appearance of the wheels and their work was like unto the color of beryl; and they four had one likeness; and their appearance was as it were a wheel within the middle of the wheel." (Ezekiel 1:16)

In August 1901, Reverend Cannon set his plan in motion by founding the Ezekiel Airship Manufacturing Company. He sold stock certificates to locals at $25 per share and raised $20,000. With this money, Cannon built the Ezekiel Airship at the P. W. Thorsell Foundry in Pittsburg, Texas. Completed in 1902, the Airship had large fabric wings and was powered by a 4-cylinder gas engine. It featured four sets of vertical paddles mounted on the wheels driven by the engine. The premise was that the paddles would churn similarly to those of a paddleboat in water. The original Airship weighed a mere 406 pounds.

Upon completion of the Ezekiel Airship, curiosity got the best of Gus Stamps, a foundry worker who helped build the flying machine. He and some fellow workers decided to try it out. According to undocumented accounts, Mr. Stamps started the engine and the Airship rose to approximately 12 to 15 feet. It flew some 167 feet before starting to drift towards a fence, at which time Mr. Stamps shut off the power. This was in 1902, one year before the Wright Brothers' famous flight in Kitty Hawk, North Carolina. Ironically, Reverend Cannon was not present to see his machine in flight, because he was preaching at a nearby church. There was no fanfare and no newspaper coverage due to the secrecy surrounding the invention. The debate still rages today as to the validity of the storied flight, but local interest in Cannon’s prized invention was already on the wane.

In 1904, Reverend Cannon loaded his Ezekiel Airship onto a railroad flatcar and headed to the St. Louis Fair, where the airship was to be exhibited. On the way, a storm blew it off the flatcar in Texarkana and destroyed the machine. Reverend Cannon left it where it lay, but he did not give up on his dream of building a successful airship. He continued trying to build a flying machine until 1913, when his final attempt was flown into a telephone pole by a hired pilot during a test flight. In 1922, all of the Reverend's plans for the Ezekiel Airship were destroyed by fire.

In 1987, the Pittsburg Optimist Club built a full-scale replica of the Ezekiel Airship, based on one surviving photo. It was displayed in the Pittsburg Hot Links Restaurant in Historic Downtown Pittsburg until 2001, after which, it was moved to its permanent home at the Northeast Texas Rural Heritage Museum. The original Airship weighed 406 pounds; the replica, hanging from the rafters of the museum annex, weighs a whopping 2000 pounds. The annex also includes an exhibit of Reverend Cannon's Bible, open to the first chapter of Ezekiel, as well as video accounts of the Ezekiel Airship.