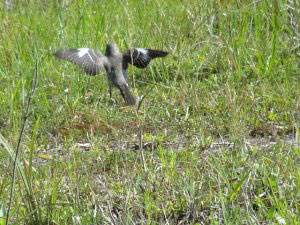 One day at Jones Elementary, our son found an abandoned, fledgling mockingbird that could not manage to fly. The students in the class were concerned about it. They brought it to me, the junior high science teacher. I used the opportunity to teach the students and my sons a little about the state bird of Texas. Then, I took it home to feed and raise until we could release it into the wild.

Our boys, Sean and James, thought we should name the bird. When "Tex Feather" was suggested, they heartily agreed to that moniker. Both boys enjoyed working with and watching Tex Feather as he developed and turned into an adult. They fed him canned dog food and caught grasshoppers to feed Tex Feather by hand. Tex Feather would fly to them with enthusiasm to eat.  We all took great pleasure in watching Tex Feather hunt for bugs on his own. He would hop around on the ground, spread his wings to get a bug to reveal itself, and then quickly catch and devour it. He became very adept at using the technique.

The day came to take Tex Feather to the wooded area east of the red bridge located on Fort Clark Springs. Mixed feelings were felt by all as Tex Feather was released into the wild. The next few days, we were elated when Tex Feather would visit our yard and make his presence known for a bit before flying off on some adventure. To this day, whenever we see a mocking bird, we say that Tex Feather is checking in to say hello. Why, Tex Feather has even checked in to say hello to us when we have visited our grandchildren in Georgia.