Sam Schwartz and The Aztec 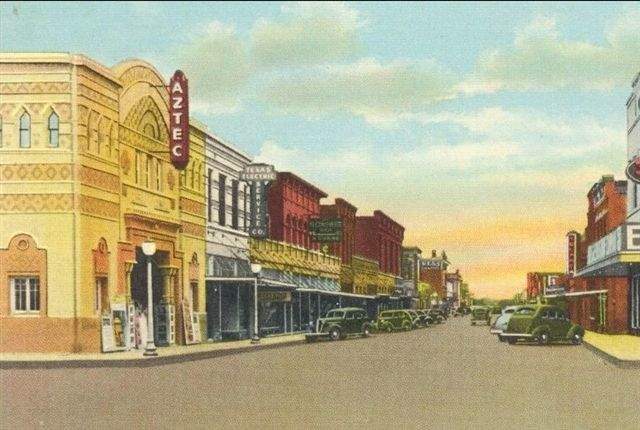 Can you imagine not being able to see a movie theater on a Sunday? In the community of Eagle Pass, circa 1915, blue laws prevented theaters from being open on Sundays. That didn’t stop Sam Schwartz, businessman and Aztec Theatre owner.

A Hungarian immigrant who moved to Eagle Pass from El Paso, Schwartz opened the Aztec Theatre in 1910 in the midst of the Mexican Revolution. At that time, 16,000 National Guard troops were station at Fort Duncan in Eagle Pass, a town with a population of less than 5000. At 10 cents per person, Sam found his small business thriving. The only problem he had was continuously being cited for violating the “blue laws.” According to the Maverick County Criminal Records, he was found innocent on numerous occasions and fined on others. He found that it was cheaper to pay the fine than close the theater for a day.

The Aztec was not Schwartz’s first theater. A few years prior, Schwartz opened the Majestic, a half a block east of the Aztec Theater. There were dirt floors, benches, and a hand cranked projector where silent films were shown. Sam called the back of the building his home and did all of the work except for running the projector.

Throughout his life in Eagle Pass, Sam was involved in many civic and governmental affairs. A 32nd degree Mason, he was the director of the Border National Bank, later the First National Bank of Eagle Pass. In 1918, he was elected to city council and between 1920 and 1924 served as mayor. During his term, he paved the streets of Eagle Pass, organized a fire department, and defended the town against the Ku Klux Klan. When he was told that the Klan was planning to parade down Main Street, Schwartz asked the Governor of Texas to assign a Texas Ranger to Eagle Pass to maintain the peace. He then issued a proclamation that anyone seen in the streets of Eagle Pass wearing a mask would be shot on sight. The Texas Ranger sat in the middle of the street, rifle across his lap, and waited for the masked Klansmen to show. None of them did.

Schwartz was also involved in founding the Maverick County Water Control and Improvement District, responsible for the Maverick County Irrigation Canal. Serving as an inaugural board member and president from 1931 – 1966, Sam was so devoted to the canal that many times he lent his own money to cover payroll expenses and help the cause. By making water available to farmers, the canal was integral in establishing Maverick County’s multimillion dollar agricultural industry.

Sam Schwartz's contributions will continue to affect the lives of future generations of Eagle Pass. The Aztec building is still in our downtown, but it is no longer functioning as a theater. Its façade and exterior have been preserved for many generations to admire.

Join 45 others and favorite this