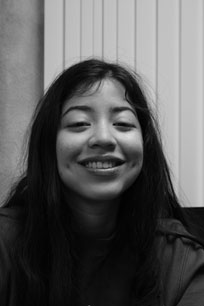 Rebeca Escobar Fraire’s story begins on a bright winter day, January 22nd of the new millenium. Born to Amanda and Jesus Escobar, Rebeca lived a sheltered life. Having been brought to the United States at only four months old, she was denied the opportunities many American-born children had. Like some immigrant families, Rebeca’s family came to the U.S. seeking the “American Dream” and a better future for their children. Amanda and Jesus decided to live a life of struggle in order to grant their little one a better future than the one they had in their home nation. This is a story full of many sacrifices in search of the promised neverland.

Having been raised in a strict, religious household, while growing up, Rebeca was deprived of the freedom other children her age had. She wasn’t allowed to cut her hair, or wear makeup. She wasn’t allowed to paint her nails or wear anything other than a skirt, and she wasn’t allowed to celebrate holidays that were deemed offensive by her religion. This made her feel like an outcast among her friends. She longed to have the same liberties other children had. Ever since she was a child she lived with the mentality that when she got older and had her own life she’d be able to experience all the things she had been deprived of. She looked forward to college with hopes of finally experiencing the taste of freedom she always desired.

Unfortunately, at the age of 13 she discovered she was undocumented. This news forcibly brought all her dreams crashing down. The freedom she longed for now seemed a million miles away. Previous to this, she didn’t know what undocumented meant or about the implications and restrictions that came with the status. This news also came with a sea of constraints she didn’t know she had. She was unable to travel outside of the United States, which had been a dream of hers since she was a child, and she was now unable to attend her dream college. Her options available for what college to choose became scarce. She was unable to receive federal aid from the FAFSA, and she no longer qualified for in-state tuition. Once again she felt trapped and segregated.

Luckily, a ray of hope displayed itself in the form of a small private college in the outskirts of San Antonio. This college provided financial aid and resources for DACA recipients such as herself. Finally, she was able to have a taste of the freedom she always desired. She was ecstatic at the thought of all the things she could finally experience. St. Mary’s University offered her a warm welcome into an unfamiliar world. Even though she finally had the freedom she always longed for, she felt lost during her first few months away from home. Luckily, she had a sponsor who helped her move in and showed her around the city. Even now she provides a source of help and comfort for Rebeca. Rebeca also met with Dave Krause who provided her with help regarding financial aid and introduced her to work study. Rebeca no longer felt like an outcast, but instead, for the first time ever, she felt in control of her own life. Texas became a home away from home.

Pablo Simental is a student at St. Mary's University in San Antonio, Texas.

Suvesh Vasal Picking Up My Great-Grandmother's House: Force Moving
Grayson Ginder The Ways Texans Help Each Other
Cherubina S. Rubannelsonkumar Deep In The Heart Of A Texan
See All Stories »