Playing All the Right Notes: A Texan's Homecoming 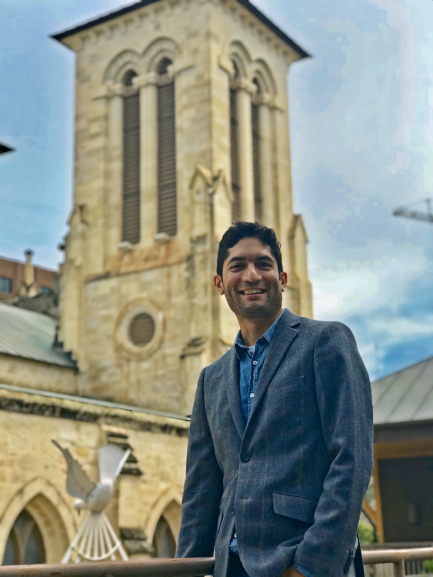 After pursuing his education and landing a teaching position at Cameron University in Lawton, Oklahoma, he found himself back at his alma mater, St. Mary’s University. When I asked him about this stage of his life he describes it as a, “homecoming.” Born and raised in the 210, Dr. Mireles attended high school in the area and decided to attend St. Mary’s University for his undergraduate degree. His Texas blood has always run deep; his mother grew up in Corpus Christi and his father in Lockhart, after which they then found their way to the city of San Antonio.

In my conversation with Dr. Mireles I asked him why he chose to pursue a career in music, and he enlightened me with a story. He began by telling me that he came to St. Mary’s as an undeclared student. He was in between choosing a career in math or music. With the two “M’s” looming in his future, he sat in his dorm doing his calculus homework and said to himself, “I don’t want to be doing this anymore!” The very next day he declared his major to music education and never turned back.

He mentions that his grandmother was the one who introduced music into his life. She played the piano and would often teach her grandchildren how to play as well. This sparked great interest for the young Dr. Matthew Mireles. In beginning band, he chose to pick up the euphonium. He didn’t want to follow in his brother’s footsteps and pick the trumpet; he wanted an instrument that was unique, and that it was. As I spoke with him about this choice, musician to musician. He mentioned, “[choosing the euphonium] shaped the rest of my life.”

Dr. Mireles describes himself as taking life “one step at a time,” when it came to his career. Once he walked the stage and received his undergraduate degree, he chose to continue with his education and got the heck out of Texas. He traveled almost 12 hours east to attend the University of Alabama. Having never left the Lone Star State, this was a new experience for him, but a good one. After walking the stage again and this time receiving his graduate degree, he took a trip up north about 13 hours to Madison, Wisconsin, for his doctorate degree. He chose to attend these schools to not only experience places other than Texas, but to be instructed by successful professors in his field.

In Texas there is great emphasis on music education, significantly more than any other state in the country. Anyone who knows music, knows that Texas holds one of, if not, the largest music conferences each year. TMEA or the Texas Music Educators Association, had an attendance of 30,383 people for the annual conference in 2019. Dr. Mireles was one out of those thirty thousand. He accepts that he is a product of Texas’ competitive music atmosphere, however, “competition shouldn’t be your motivation,” he says as talking about the driving force to succeed in music. Dr. Mireles has won various competitions, a notable one being Leonard Falcone International Euphonium Competition in 2008. He considers this one of his best accomplishments. Regarding this victory he says, “it has showed me a standard of what I am capable when I put my mind to it.” Recently, the San Antonio Brass Band which Dr. Matthew Mireles conducts of the best-of-the-best brass musicians from South Texas, claimed the National Brass Band Association Championship in 2018. Being the very first group from Texas to win this competition, Dr. Mireles says, “[it’s] exciting being with that group!” and that they simply, “just tried their best,” when it came to the last section leading up to the final title.

Inspired by his youth and high success rate, I asked him about his position as a younger professor at St. Mary’s University. He tells me that it’s not harder being a young professor but that everyone is in “different stages,” of their professional career in regard to his colleagues. Dr. Mireles believes that it is a matter of experience vs. energy and his “energy” allows him to be proactive in growing the Music Department at St. Mary’s. Through that act he considers himself in the middle of his knowledge as he is constantly learning more and spreading that to his students.

As I listened to Dr. Mireles tell me his Texas story, I had one last question for him. What does Texas mean to you? He pondered for a while until finally saying, “home.” Home is what Dr. Mireles associates with the great state of Texas. How beautiful is it that the 268,597 mi² of Texas means home? He further began to describe that Texas holds his family, his childhood, and his success.

Though an outsider to the Lone Star State, but a native to music, I am grateful to have spoken with Dr. Matthew Mireles about his Texas story. His sharp skills never led him to fall flat. It has been no accident, he just played all the right notes which led him back to his hometown of San Antonio, Texas.

Adrianna Mirabal is currently a freshman at St. Mary’s University pursuing a bachelor’s degree in Music Education. After completing her undergraduate degree, she wishes to further her education to receive a master’s and doctorate degree in musical arts and later teach at the collegiate level. She is member of the wind ensemble, woodwind ensemble, and chapel choir. Adrianna is a native to Las Cruces, New Mexico, and enjoys spending time playing her oboe.