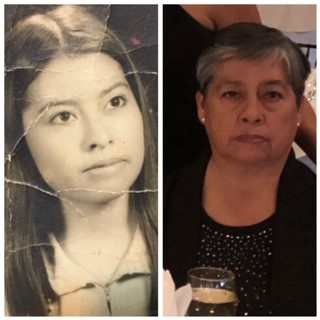 Mi Madre, a very strong and hardworking woman, came from an old traditional family. She inspired me and my sisters to be strong independent woman and no matter what you decide in life make sure you’re happy, and most importantly you take care of each other. Family comes first.

Mi Madre Elizabeth Eguia, was born on September 5, 1954 in a very small town called La Cuchilla, in Coahuila, Mexico. Her parents were Aurora Eguia and Alejandro Eguia. Her dad worked in the mines and her mother worked as a seamstress, or cleaning. Mi Madre’s father died in a tragic accident working in the mines. At the time Mi Madre was five years old and she recalls looking down at her father’s casket and wondering what she was looking at—a memory she says that she will never forget. The loss of her father left her mother a widowed single mother raising six children on her own. Mi Madre recalls her mother working hard to make sure food was on the table and at times there would be no work. Mi Madre could recall when her mother made the hardest decision to leave her six children behind, in the care of their grandmother. She left to the United Sates to work. Mi Madre was sad, but being very young she really didn’t quite understand why her mother had to leave. Mi Madre grew up very poor with only a pair of shoes to wear to and from school, but would walk barefoot to school so she would not damage the sole of her shoes. That way her shoes could last longer, so most of the time she was barefoot. During the cold winter times she would share a bed with her siblings to stay warm. She remembers warming up the water and bathing in the cold. On the railroad tracks where she played, all the neighbor kids knew her as the orphan child. For six years, her mother would come and go to visit and bring all kinds of gifts from the U.S., but when her mother had to leave, that was very hard for her.

Finally, after six years, everything changed. In 1966, when she was 11, her mother came and was married and took all her six children to the United States. Mi Madre, came to San Antonio, Texas as a resident alien. Once, she arrived to Texas she remembers being sad and scared. This was a whole new world to her. She cried every night wanting to go home. She saw highways, big buildings, roads, and now finally her new home. Mi Madre, attended James Bowie Elementary. When she left Mexico, she was in 5th grade but attending school in Texas they moved her down to 3rd grade. She did not know English at all. The only language my mother knew was Spanish. She recalls the segregation that was happening at the time, the riots, and thinking I left my home to come to this. Over the years my mother adjusted to her new lifestyle and soon learned English and went on to Middle School, and by eighteen years she became an American citizen, graduated from Fox Tech High School in 1973, and married at the same time. Mi Madre soon attended college for a few years.

Mi Madre, thinks back at what she went through and wonders what her life might have been if she had stayed in Mexico. But she is very grateful and now understands the sacrifice her mother had to endure to make the fateful decision to leave her children behind in order to make a better life for her daughter and grandchildren. She knows now what it means to be a mother. But Mi Madre, does think back and says the happiest time in her life was her being barefoot as a child. To me, Mi Madre, is my hero. She is my history and without her I would not be where I am today. I’m so grateful for her and my grandmother.

Aurora Torres was born and raised in San Antonio, Texas. She is the single mother of two amazing children. She attends St. Mary’s University as a History Major. She has published a few articles for the StMU History Media. She also loves to run the one thing that takes her to another world.