"I Have a Superpower" 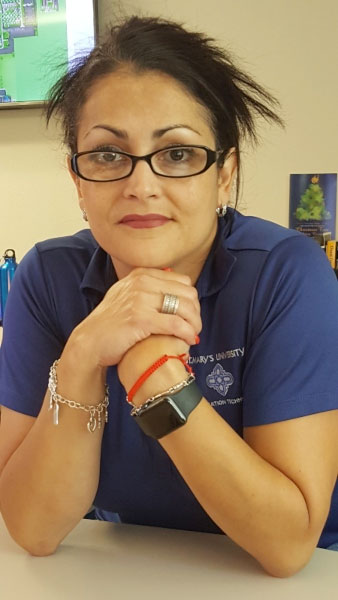 You would think sitting at a desk almost all day, waiting for people to come to you with problems would be the most boring job in the world, but to Maria Isaura Lopez, known as Isa to her coworkers, it’s an amazing experience.

She is currently working as an operations coordinator/technical writer for information services at St Mary’s University and loves every second of it. As I sat down with her for this interview, I couldn’t help but notice how happy she seemed.

“First of all, you have to understand that my background and my childhood was in Mexico City,” she began. Growing up in Mexico and then moving to the United States at a young age had given her several advantages, the most notable of which was being bilingual due to having Spanish-speaking parents. “I talk to you in English—or, my best English, I guess—but all day long with my family, my kids, I speak Spanish," she spoke with a smile.

“Living in San Antonio, all I can tell you, you have to be bilingual,” she informed me. This was also the reason why she teaches her children Spanish. She wanted them to have this ‘superpower’ as she called it that she has and be able to succeed in life. I’ll admit, I only remember a little bit of Spanish from when I took the language in high school, but I know it would probably be helpful to know the language off the top of your head rather than having to use an app to translate it in order to communicate with others.

Going back to her earlier years, Maria had also lived in New York and Chicago, though being away from family and away from Texas had been hard on her, so she finished up college and a contract she had before moving back. “It [living in New York] took a toll on me, I got a little bit depressed,” she admitted.

Moving back, she had her sights set on living in San Antonio, despite spending most of her time in Laredo. “All of a sudden, this position opened, and it was like God opened, like, ten thousand doors to come in here, so I took it,” she beamed. She’s been working with the St Mary’s community for six years and counting and has been loving every moment of it. To her, Texas is home, no matter how unbearably hot it may get during the summer months.

In the last few moments of the interview, Maria imparted some wisdom that she had picked up during her life that she wanted to share with others. She wanted people to know to make their voice heard and to do their best. “Don’t think for reason that you’re no less than a man or that you’re not right if you don’t try.”

Gabrielle Christman is a sophomore majoring in Biology at St Mary’s University and an aspiring genetic counselor. She was born in Florida, but has spent most of her life in San Antonio, Texas due to having military parents who retired soon after moving there. When she isn’t stressing over school, she can be found drawing or writing to pass the time.