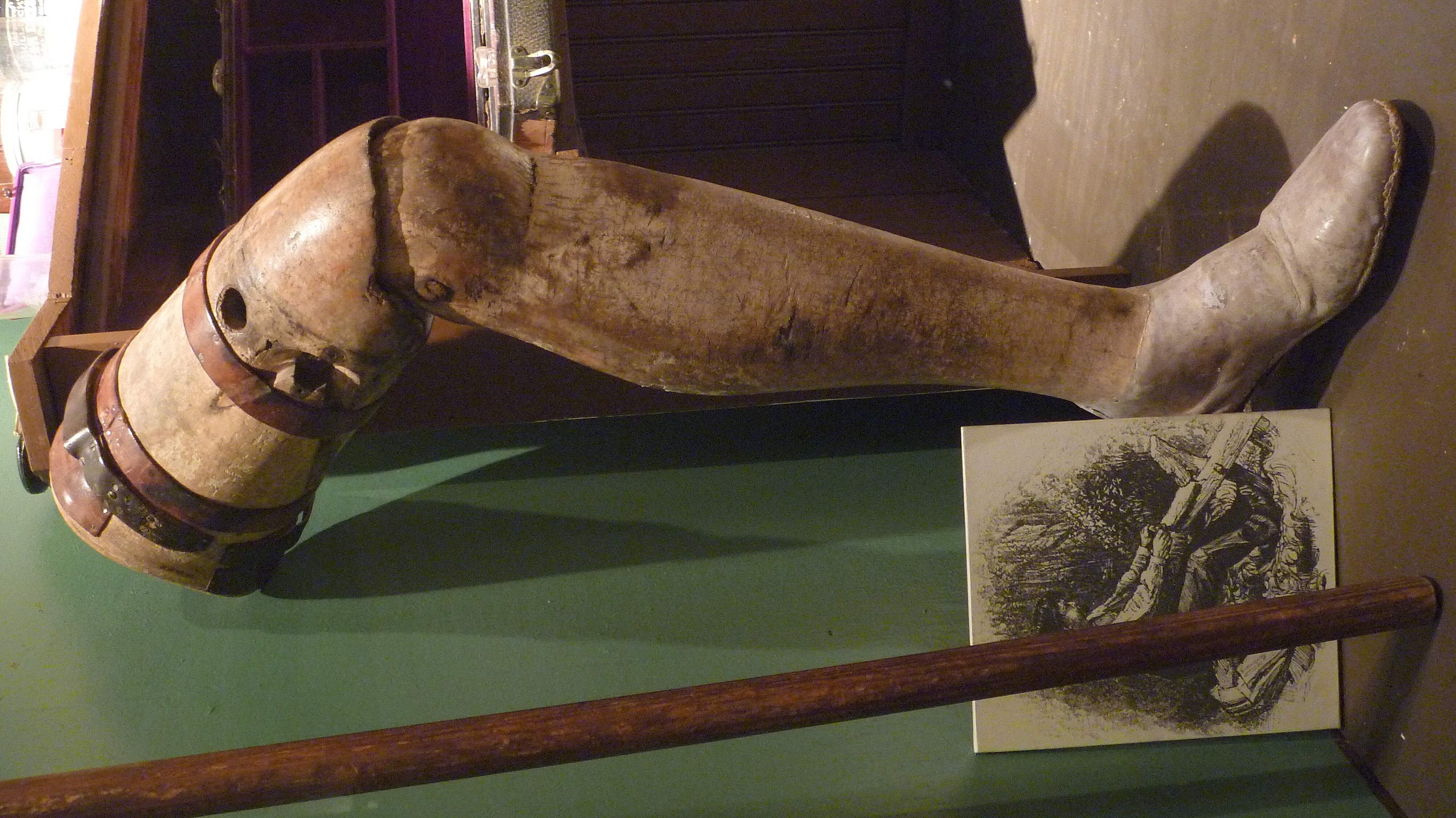 Leaning awkwardly against the medicine cabinet is an honest-to-goodness wooden leg. Constructed in 1883, the leg is a modeled wood form covered with canvas. Painted a light flesh color, it wears a light green leather shoe complete with a leather sole. Within the knee joint is a steel rod that pivots up and down with a spring. Hollow to the knee, the whole thing weighs just over five pounds.

The wooden leg, or prosthesis, came to the Sophienburg Museum & Archives in 2000, along with another more advanced model that included a hinged ankle as well as a knee joint. Both belonged to the grandfather of the donor, Myrtle, who believed that his story should be told and remembered.

Heinrich Carl Meyer was born in New Braunfels in 1857. He grew up in this German community learning all the skills necessary to be a farmer/rancher, including how to build a fachwerk house, in which the cut trunks and larger limbs of cedar trees were squared off to be used for the framing. This was done by placing the limb on a schnitzelbank and using a draw knife to remove the curve. Meyer was performing this task when the tool slipped, cutting him deeply in his left thigh.

Granddaughter Myrtle continued to tell the story. “He was healing just fine, but a travelling man who said he was a doctor, took a look at the injury. He told my Grandpa that it was going to leave a bad scar, but he could fix it. Don’t know why Grandpa was concerned about that, but he let that man tear off the scab and rewrap the wound. A few days later, it was all infected, then it turned to gangrene and they had to take it [the leg] off. He was 18 years old, a farmer, and he still got married and farmed, making leather straps to help him with walking behind the plow.”

Myrtle also said she remembered her grandpa always saying that the stump hurt. He explained to her that when they took the leg, “…they didn’t shorten the nerves and such so they touched the inside of his fake leg.” She was fascinated by the man and his story of acceptance and perseverance.

Today, that story of Heinrich Meyer’s strength of character is shared with visitors of all ages. Children see Meyer’s struggle reflected in the efforts of wounded soldiers they see and know. The kids talk openly about how difficult it must be to cope with the loss of a limb. In a wonderful way, Myrtle’s desire to honor her grandfather has given us a beautiful platform to teach acceptance and respect for the physically challenged.

Keva Boardman is the Programs Coordinator for the Sophienburg Museum and Archives in New Braunfels.