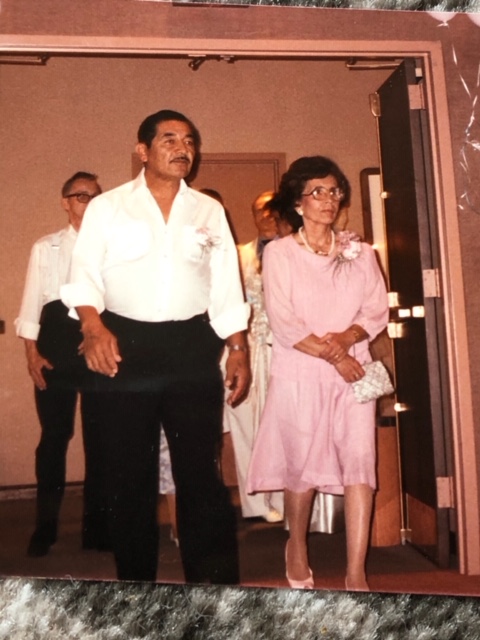 Kissing her parents goodbye, Yolanda Sanchez a seventeen-year-old girl left her parents to go to the Lee High School football game. “You have to be home by midnight,” her father sternly told her. She agreed and left with her sister. Her sister had collected a wedding dress, Yolanda had snuck out her bedroom window. They went to a friend's house in the neighborhood, there Yolanda put the dress on and her boyfriend picked her up. Instead of going to the football stadium they made their way to the courthouse in San Antonio, Texas to get married.

Yolanda laughs as she recalls having to leave early from her own wedding party to get home for her curfew. As a woman in her sixties she could laugh at her younger self sneaking around her strict traditionally Mexican parents. Her life is fabricated from thrilling moments of adventure and her family’s Mexican culture. Her parents grew up from Mexican migrant families who lived along the U.S.- Mexican border in Laredo, Texas. Her early childhood was spent living in Laredo, Texas in the 1950s as the oldest daughter of four children. As a child, she was tasked with cleaning, caring for her siblings, and assisting her mother in maintaining the household while her dad searched for jobs after serving in the military.

Her relationship with her identity and culture transformed more throughout her life. She detailed crossing the border to visit the doctor and shop at markets with her mother, but she considers herself to have never been to Mexico. Her idea of Mexico is beyond Nuevo Laredo, Mexico that lays on the other side of the militarized border she grew up next to. The parts of Mexico by the border where she would run errands compare nothing to the large cities and vacation destinations that are prominent in United States’ ideals of Mexico. Despite living on both sides of the border, she still feels distant from her Mexican roots.

A significant shift in her life occurred when her family migrated to San Antonio, Texas. Her father hitchhiked to San Antonio from Laredo to search for job opportunities. Once he found a job, the whole family moved to a house on the Southside of San Antonio, where he worked with sheet metal. Shortly after moving to San Antonio, a family member gave them a home more North of San Antonio near Jackson Keller Road. Moving north of San Antonio, she faced new methods of discrimination as one of the few Mexican families in her neighborhood and school. She had to help her parents navigate certain parts of the city by teaching them the English her siblings and herself were learning in school. She did not have to start speaking English more until she came to San Antonio. Reaching into her adult years at Lee High School, her oldest brother would pretend not to know her and her other siblings because he was the lightest skin-toned and wanted to fit in with all of the “white kids.”

When we think of the vibrant Mexican-American culture celebrated in San Antonio, Texas, we do not think about the intense discrimination and segregation between white and black and Latinx people. We also do not think about how these people continue to suffer these experiences. She is not the only one who lived it, but it is a story seldom told.

Camryn Blackmon is a Junior at St. Mary’s University majoring in International and Global Studies. She was born and raised in San Antonio, Texas. She is a student research assistant for the Sponsored Projects, Academic Research, and Compliance office and Intern for Women’s Global Connection where she has been organizing the annual Girls Global Summit. She is passionate about politics and activism and in her free time she enjoys painting.