Clash of Cultures: A Story of Rediscovery 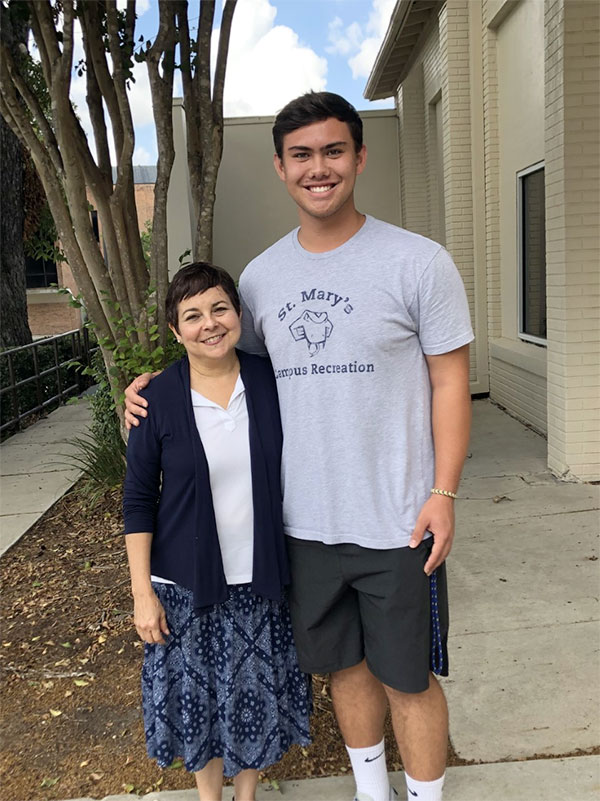 Share
Maria Smith (left) is the minister for pastoral music at St. Mary's University, the fearless leader of the St. Mary's Chapel Choir and was recently awarded with the Marianist Heritage Award at the University.

Maria Smith is the minister for pastoral music at St. Mary's University, the fearless leader of the St. Mary's Chapel Choir and was recently awarded with the Marianist Heritage Award at the University.

Maria was born in Nuevo Laredo, Mexico and lived there for a short time until her parents moved the family to Corpus Christi, Texas. She grew up as a Mexican in the American education system. As she grew she began to experience a split in her worlds. While at school she immersed herself into American culture and society, but the instant she came home she was "in Mexico again or mini-Mexico" as she lived in a Spanish-speaking household. Most of her family resided in Mexico and her family is what helped her hold onto her Mexican roots.

While this internal cultural dispute was difficult during her high school years, she felt even more tension during her college experience. Maria attended Incarnate Word College in San Antonio, now named the University of Incarnate Word, for two semesters until she decided to join a religious community. In 1976, Maria joined the Schoenstatt Sisters and remained with the order for 11 years. The Schoenstatt sisters are a primarily German order of nuns where she experienced and identified to some degree with German culture. At this point in her life she is struggling to find her cultural identity fighting between one that was integrated into the fibers of her being and two others that she was immersed in.

In 1990, Maria met her husband and they both found jobs in Victoria, Texas, where she became a theology teacher at St. Joseph's high school. She soon felt the differences in the demographic. Victoria, Texas at the time did not have a very large Hispanic population and the majority of the population was Anglo-Saxon. For roughly 17 years she once again felt the strain on her heritage being immersed in a different society and a different lifestyle.

In 2007 Maria's husband found a job in San Antonio and Maria herself was hired at St. Mary's University, her alma mater, as the music minister. A peer faculty member came up to Maria one day and told her about the change in demographics at the University. In the past the university was predominantly Anglo and predominantly male, however when Maria was hired the female population was more prevalent as was the population of Hispanics. "When I came back, it was like re-entering the culture again".

Cultural diversity played a prevalent role into shaping Maria into the woman she is today. Today when she's faced with the question of her identity, she knows who she is. "I can say that I can easily identify with both cultures (Mexican and American), however the default is always Mexican. It's who I am."

Anthony Klutho Jr. is a Sophomore Exercise and Sports Science Major, from St. Louis Missouri, with a minor in Theology. Anthony (AJ) is studying to pursue a career in Physical Therapy, while also pursuing his faith, youth ministry, and potentially music ministry within the Catholic Church.  He loves to do anything outdoors, loves playing sports and loves to play music.