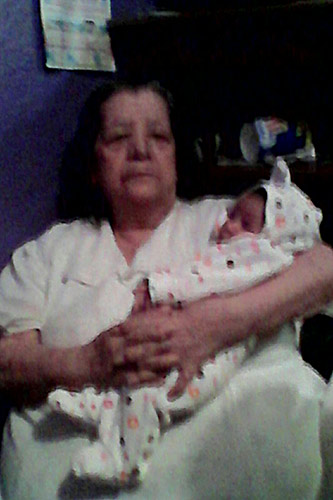 On a beautiful Monday afternoon, my mama Nena was picking eggs from a chicken coop in Pittsburg, Texas. She and my grandfather had migrated to Texas to stay with her brother in search of better job opportunities. My mama Nena and grandfather had eight children all whom they found themselves having to leave behind to be cared for by their oldest daughter. Their oldest daughter was twenty years old and their youngest were six and four years old. When my grandparents returned, their oldest daughter married right away. For five years she had become the mother of her own siblings.

The moment they first arrived my mama Nena saw all the beautiful trees as the sun hit her face and she fell in love. She had never traveled outside of Mexico and this was her first true adventure along with my grandfather. For as long as she could remember she had devoted herself to pushing through for the betterment of her family and coming to Texas had brought her the best of opportunities. She was able to spend time with her brother whom she had not seen in a very long time, she got to have a job to finally provide for her children, and she also got the chance to experience a new environment that helped her grow as an individual. Mexico was going through a rough patch during that time. Jobs were hard to obtain and bringing food to the table was also a struggle. This is what pushed my mama Nena to travel such a long distance to better her family.

There was unity and everything was so peaceful in Pittsburg, Texas. It was like a dream come true. Every day my mama Nena and grandpa would walk a long distance to the chicken coop in which they worked. When it was time for lunch, her brother's daughter would bring them fresh-squeezed lemonade and a light meal. As she ate her meal, she'd look upon the tall green trees as sweat dropped down her face from the hot sun. It was the Eldritch forest that delighted her and cottages that warmed her heart.

She had the greatest desire to bring her whole family along and move to Texas where they could start over, where she no longer had to leave her children behind. She could finally have them along with her while she tried to better and provide for her family.

Every single person that my mama Nena encountered along her journey in Texas was very kind and polite. In Mexico, people constantly were encountering discrimination but in Pittsburg she never encountered any situations where this was an issue. In Mexico, people were trashing each other’s homes and even burning cars. Texas had showed her that there was a peaceful living environment where everyone could get along. The chicken coops helped her appreciate and cherish everything in life. She worked very hard in the chicken coops from sunrise to sundown.

She recalls very vividly the plans that she and my grandpa made to start a life along with her children in the land of Texas. She could picture her children running through the green grass and picking the lovely yellow flowers.

Eventually my mama Nena had to give up her dream of living in Texas and all the hard work she had put in to arriving to Texas. Her in-laws became very ill, forcing them to return to Mexico.

Daniel Infante Be Someone
Emmanuel Serrano Alcaraz From Surviving to Thriving: Burn Survivors Thrive Thanks to Those Who Care
Anai Rivera To Have and To Hold From This Day Forward
See All Stories »