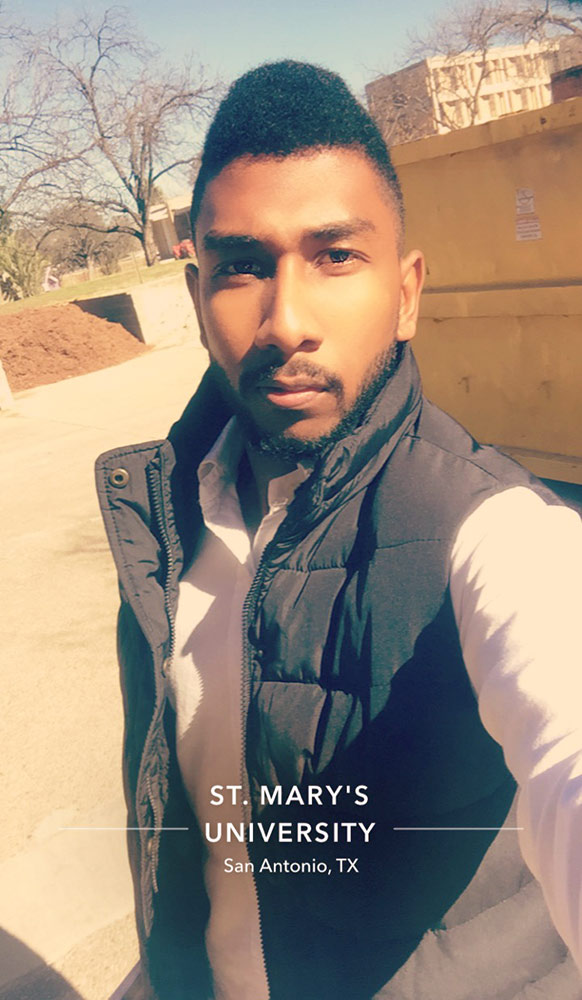 This story is told by Brianna Minharez who was interviewed by Basil Qasem.

Texas is the only state that I’ve known. I was born and raised in El Paso, Texas. Growing up, my family would take vacations in different cities in Texas. I would say the most distinct feature about Texas is that we are, I believe, the second or the third largest state in the whole United States. Growing up, I thought that was really fascinating because it just really made me feel small to know that there is so much land in Texas and so much to explore. I always felt that Texas was special to me because it used to be a country of its own before it was a part of the United States. But it was separate for only a short time. Another thing, Texas is a large state. You can drive for hours and still be in the same state.

A lot of people say that Texas weather could be temperamental because some days it's very sunny and other days it could rain. So people say the weather in Texas is not always moderate. But the best day in Texas, to me, is when the sun is out and it is warm. I really enjoy the hot weather. When I think about it, there is one time I was driving in a car and I could see a huge cloud and it was raining just in one tiny section. I drove through the cloud and it was raining all around me and the car, and it just looked ugly and dark. And then, as I kept driving, I passed that rain cloud and then it was back to being sunny. I always thought that was interesting.

The worst moment I have faced was with my uncle who I was very close to. He is from Mexico. My aunt was born in the United States as an American citizen. She fell in love with this man and she didn’t know he was not a U.S. citizen. So there were many times that I grew up that I did not have my uncle in my life because the El Paso border is right alongside the Mexico border. So I would say a sad moment is knowing that people like my uncle and other people I know that have a life in Texas don’t always have an opportunity to enjoy their life because of immigration and the borders that are so close to Texas and Mexico.

My experience with people in Texas is that they are very friendly. One thing I noticed about Texans is that they are respectful. They open the door for one another and they are very hospitable. In Spanish we say, "Mi casa es su casa," meaning that "my home is your home" and I feel like a lot of people embrace that saying. However, I would say that also comes from Texas's influence from Mexican culture. There are a lot of Mexican Americans that live in Texas because of the years that Mexicans migrated to Texas and Texas became their home. So I feel like a big part of our friendliness, our family values, and our hospitality comes from a lot of our Mexican American roots. And for the Texans that don’t have any roots in Mexico, I think that just comes with an appreciation of Mexican culture. All my childhood friends still live in Texas and had big dreams of graduating from high school and moving to different states. But one drawback I would say about living in El Paso, Texas (maybe it's not the same for other places in Texas) is that we have a very family mentality. So a lot of my friends had offers to move out of Texas for the first time in their life and go to colleges outside of Texas. But all of them decided to stay in Texas because they felt comfortable and they wanted to stay where it was familiar for them. It was a pro and a con for me. It was a pro because now I have my friends that are still close and I’m still friends with them now because we all live in the same state together so we can visit a lot easier. But it is also a con because they never got a chance to experience life outside Texas.

Where I grew up in El Paso, I don’t remember too many distinct festivals. But one festival I can say that I have participated in since I lived in San Antonio is the Fiesta event. That is a two-week long celebration and it begins with Texans celebrating the Battle of the Alamo. For two weeks, there are different events that people participate in and they're celebrating Texas culture as well as Mexican culture. It is a really fun time and I can say that it is a really great festival we have in Texas.

I believe Texas has changed a lot since I was born. Politics change, different governors go into office, policies are made, and they change a lot of things. Some of the places that I grew up knowing are no longer there because they get torn down and new places are built. But I see these changes as good changes because I will always remember what was. But now I can appreciate the new changes that have come. I can't really think of a specific change other than a place in El Paso that was an historic area that was torn down because they wanted the city to grow. And the city doesn't have any major sports team so they tore down that historic area that many older El Paso citizens loved. But they wanted the city to have more profits and more income so they built a baseball stadium. So even though there is that area in my town that I miss and it is a part that I remember growing up, I can still appreciate the new baseball stadium that they built.

Texas is so large. There are a lot of different things where I come from. Specifically, we are known for many mountains. I would say that one thing about Texas that has remained the same is our beautiful mountain ranges. What is unique about them is that it is such a huge mountain range that it extends from El Paso, Texas to Juarez, Mexico.

One thing that I always appreciate about Texas and I have had the pleasure of celebrating throughout my youth is that I have never experienced racism or discrimination despite being Mexican American. I think part of that is because, like I said, Texas is very friendly and people that I have come across have been respectful to me. However, stories that my parents told me when I was growing up have been different from my experience. For example, Texas wasn’t always so welcoming and so nice and friendly to Mexicans during my parents' childhood. They were very racist and they did not want Mexican Americans to embrace Mexican culture and speak Spanish. They wanted them to conform to American ideals.

My grandpa experienced that. He would tell me stories because when I was little I would ask him, "Grandpa, why don’t you speak Spanish to me? I want to learn Spanish!" My grandpa said, "Mi'ja, not even your mom or your aunt know Spanish." And I said, "Why didn't you teach them?" He said, "Because when I was a child and my parents moved from Mexico to El Paso, I was enrolled in elementary school in Texas and, when I would speak Spanish, my teacher would hit me with a ruler. And, if the teacher couldn't discipline me because it was hard for me to learn English because I was so young, they would send me to the principal and the principal would discipline harsher and they would spank me. And so, over time, I grew up thinking that Spanish was wrong because they were trying to get me to just speak English and only English." He continued, "Even though I can speak Spanish now, I still have it in my head that it is wrong and that is why I never taught my own children the Spanish language." That is a memory and an experience that my grandfather had shared with me about Texas. It taught me that even though Texas is celebrated for being diverse and being open to different cultures such as the Mexican culture, being bilingual and speaking more than just English is a good quality to have. It wasn't always considered a good quality.

Texas is famous for oil. There are a lot of huge companies that generate a lot of the gasoline that our cars and a lot of technology use so I would say oil is a big part of what makes Texas unique. I would say another thing is BBQ because Texas is very big about its cattle. So we have a lot of different places where we can have really good BBQ that I have never been able to find in other states. There is BBQ in other states but not as good as how it is made in Texas. There are a lot of people that visit Texas because it's such a big state and I've met other Americans from different states. But I’ve also met other people from different countries. I had a friend that was a foreign exchange student. She was from Japan and we would talk a lot about our culture and we would share our experience. I learned a lot about Japanese culture and how their cities were run and how their society is structured. I learned from her because she is from Tokyo in Japan and the way their cities are run are very different than cities in Texas. So I think it is a really good experience because I got to learn about people who think differently because they are not from Texas and they have a different upbringing and background.

My name is Basil Qasem. I am an international student in St Mary's University, majoring in Mechanical Engineering. It was interesting to hear about people's lives in Texas.