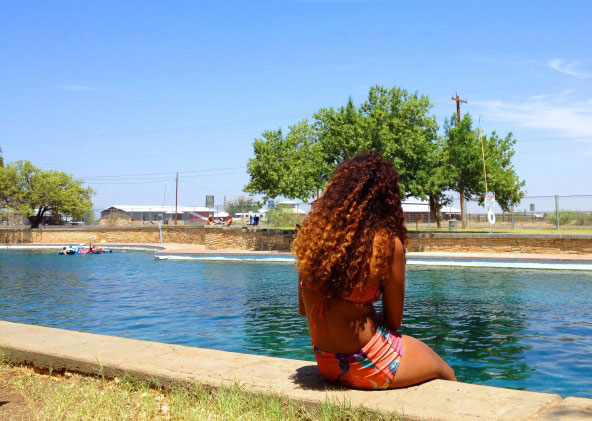 Share
Cool comfort in the waters of San Solomon Springs.

When I finished graduate school at the University of Texas in May of 2012, my boyfriend (now husband) and two close friends from school and I took a trip to West Texas to celebrate. It was only the beginning of summer, but it was already unbearably hot and humid in Austin. The high temperatures that summer would break many records. As we headed west and the humidity began to dissipate, so did all of our tensions from two years of graduate work. We rolled down the windows to let in the cooler desert air and relaxed as we watched the landscape change.

Our first stop was in Balmorhea to spend two days swimming in San Solomon Springs. None of us had visited the springs before and we were so excited to see what we all had heard so much about. We arrived at the park with just enough sunlight left for a swim. Against the backdrop of a desert sunset and the West Texas mountains, we all jumped into the crystal clear, 72-degree spring water. We spotted a high dive at the opposite end of the pool and instantly knew we had to jump. At the diving board were a couple of middle-aged American Indian guys who were taking turns on the diving board doing very impressive double flips and backward dives. Between our very unimpressive pencil jumps off the board, they told us that they grew up in Balmorhea and had gone swimming in the springs nearly every day of their lives. They jovially gave us a hard time about our skills on the diving board. We spent the next couple of hours swimming and diving with the two locals before heading to our campsite to make dinner.

I was so in love with San Solomon Springs that when, a few months later, my co-worker told me she also loved to swim there, we planned a small detour in our route home from a work road trip to El Paso. We were carrying heat-sensitive materials, so we knew just how long we could leave our van for a swim in Balmorhea. We stopped, made a mad dash to get in our swim suits, and took a twenty minute swim. We began the remaining six hour drive home refreshed and so happy that we had been able to take a dip in one of our favorite places. After that, we stopped every year on our trip to El Paso. The short stop at San Solomon Springs became a tradition, an essential part of our annual West Texas experience, just as Balmorhea has become firmly fixed in what I love about my state.

Madeline Moya is a native Texan, a graduate of the University of Texas twice over, a Texas history enthusiast, and curator at the Texas Archive of the Moving Image.

TAGGED WITH: Science and Nature