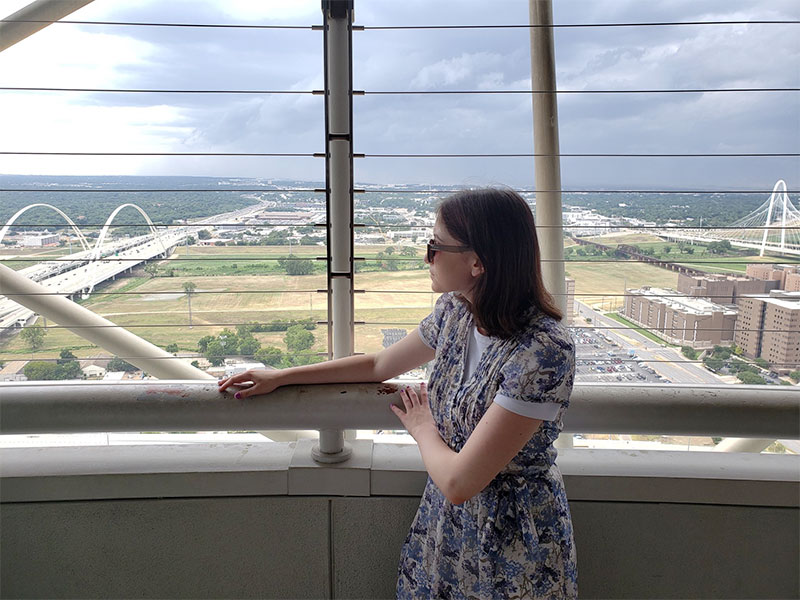 Share
Alexa Mullen is looking out from the Reunion Tower in Dallas, Texas, admiring the gorgeous view that you can see from up there.

Alexa Mullen came to Texas not knowing much about the state at all. She was born in Garnet Valley, Pennsylvania and has lived there her whole life, so visiting a completely different state like Texas was entirely new to her. She had visited many places before in the past, but Texas was very special to her. Not only was the whole experience one she will never forget, but also a time where she felt at peace and carefree.

But why visit the state of Texas? It was for a reason that many people do at some point in their lifetime; they move to a new state to pursue a new job. However, Alexa was not the person to pursue this job; it was her older brother. Alexa explains that her older brother had moved to Dallas 5 months prior to work in the fraud department at JP Morgan & Chase Co., as he wanted to experience a new place and have new experiences. He wanted her and the family to visit him, so they flew down to Dallas to visit and explore. Alexa had never visited Texas so she was super excited to go to a place to be with her family and experience the interesting things that Dallas, Texas had to offer.

Alexa recalls the scenery and people of Dallas as “a whole different world” from her home state, even though she only got to see a small portion of the entire state itself. The architecture was so different from what she was used to growing up and it was not only a new experience, but a new and refreshing atmosphere. She also discovered that Dallas was diverse, pretty much the same as back home in Pennsylvania, but she was grateful to see some diversity. Diversity was something that meant a lot to her, so she was thrilled to be in a state where diversity was notable.

Some of the places that she visited moved her in such a way that no other state had to offer. Alexa remembers how when she went to the Sixth Floor Museum, it was a place like no other. The Sixth Floor Museum is where history shall not be forgotten. “The mood of the museum was very somber,” she describes, “I had not experienced something like that before and I felt like everyone else in there felt similar.” Another site that inspired her was the Reunion Tower. The Reunion Tower was definitely one of her favorite places that she visited in Dallas. She explains that she is normally terrified of heights and anything to do with that, but the view from the tower changed her. The way you could see the skyline of the city and see many things far away from the tower was absolutely breathtaking for her. Alexa goes on by saying that you wouldn’t find places like these in Pennsylvania, however, there are some historical and old buildings that are somewhat similar to ones in Dallas. She also mentions that the food is completely different from her home state. “We don’t really have things like restaurants that focus on barbeque, so that was a new experience.” She applauds Texas for its amazing barbeque.

When asked if she would ever return to Texas, her response was prompt and effortless. “Absolutely. I would love to visit Texas again sometime in the near future as it was truly an experience I would never forget. There are so many unique things about Texas and I think that’s why Texas means so much to people and I find that inspiring.” Alexa also mentions that she would love to explore more of what Texas has to offer since she was only able to see a small portion of it. San Antonio and Fort Worth are the next places she would like to tour, specifically Fort Worth to visit more of her family members.

Isabella Garcia is a 19 year old born and raised in San Antonio, Texas. Isabella’s family includes her father, mother, younger brother, and her 10 year old Yorkie. She has been attending St. Mary’s University since August of 2018 and majors in English Communication-Arts. Isabella hopes to someday work in media including becoming a graphic designer, a producer, or possibly work in journalism.