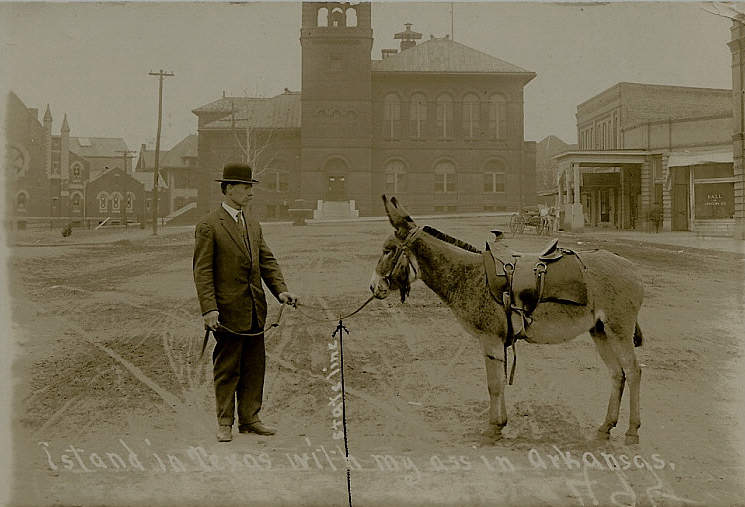 Share
Man in Texas and his ass in Arkansas postcard

“She’s my Texarkana Baby." That’s me! My father is from Texas, and my mother is from Arkansas. Or as Eddy Arnold says, “Her pappy came from Texas, her maw from Arkansaw.” This great old song tells the story of many from the bi-state city of Texarkana, which sits on the border of Texas and Arkansas in northeast Texas.

Although both of my parents are from Texarkana, they both attended the University of Texas in Austin. I was born at St. David’s Hospital before they moved back to Texarkana, where I was raised. Our family vacations often included a stop in Austin to see “where I was born.” We toured the Capitol to search for the Texas House of Representatives composite photographs that included my grandfather, Winford Lee Dunn, Sr., as well as my father and aunt Capitaleen (also born in Austin and named after the Capitol) as children. Part of the fun was finding the picture in the Capitol each time we visited! The hangings are rotated among the floors and basement.

As a long-time Texarkana resident, one of my favorite Texarkana traditions is taking snapshots at “Photographer’s Island,” the state line demarcation in front of our courthouse and post office. The first promotion of Texarkana as a bi-state city, “Photographer’s Island” was established with the creation of two very famous postcards. In one version, a man stands on the State Line in Texas and his jackass stands in Arkansas; the second version shows the man standing in Arkansas and his jackass standing in Texas. Whichever postcard you favored—“Man in Texas and his ass in Arkansas” or “Man in Arkansas and his ass in Texas”— it could be mailed to friends and family all over the world. There have been several recreations of this postcard over the years, and it is still used today.

Daily, people stand in front of the courthouse and post office at Photographer’s Island to have their picture made. Similar to the early post card, they often take two pictures, one standing in each state (usually with no jackass!). Most people don’t choose a side, just stand with one foot in each state. Working for the city’s Main Street program, I really enjoy seeing this and will often offer to take the picture for them! Because of Photographer’s Island, our State Line Courthouse/Post Office is said to be the second most photographed courthouse in the country, just behind the Supreme Court.

When Jimmy Kimmel was in Austin recently, he had a contest to win tickets to the show. He asked people to send in reasons why they should win. My daughter took her picture standing on the State Line and said she “stretched her body across two states to get to see The Jimmy Kimmel Show.” Well, she won! She’s also a “Texarkana Baby”; my husband is from Arkansas!

Ina McDowell is the executive director of Main Street Texarkana.