A Journey Defined by Faith: The Story of Father Jim Tobin 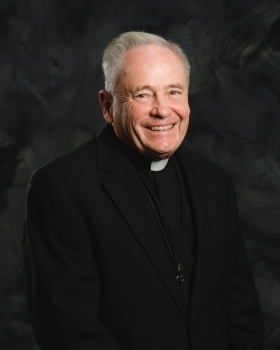 “Do not stay in the boat when God is calling you to step out of the water.”

The life of Father Jim Tobin was, from the start, a life encouraged to serve others. James Tobin was born in St. Louis, Missouri on October 19, 1936. Since he was a child, his life has been connected to the Catholic congregation The Society of Mary (Marianist Congregation). Father Jim studied at Chaminade High School and began studying for his bachelor’s degree at St. Mary´s University during the fall of 1956. This is how his first adventures in Texas began.

Father Jim Tobin's first introduction to Texas was San Antonio. He remembers it as a cultural refresh, because of the huge difference between San Antonio and his home town, St. Louis. He realized that even though he was in the same country, the culture and people where different. He found people in Texas lovely and extremely welcoming. After he finished his bachelor’s degree at St Mary´s University in the year 1960, he went down to Victoria, Texas by train to start a new adventure. In the middle of the night, the train broke down in the middle of the Texan desert. He started praying to pass the time. He confessed that he had never seen as many stars as he saw that night. That is when he once again realized the immensity of God´s creation. At three in the morning, his friend picked him up from where the train had broken down and by 8 am that day, he was teaching a class. "I got to know people and families living in small towns that were wonderful." During his time between Victoria and El Paso, Father Jim said that he got the opportunity to explore, but most importantly, learn about Latino culture. He realized that being welcoming and ready to help was not just a nice gesture, but part of a whole culture and identity.

After some years, he decided that it was time to go back to Missouri, where he disconnected completely with the “Texan culture.”  Many years later, after having studied in a seminar at the Regina Mundi Seminary in Fribourg, Switzerland, he went back to Missouri to work. Later on, he was reassigned to Texas. Father Tobin confessed that he did not want to go back. "I came kind of homesick", he said. Father Jim Tobin went back to Texas in 2013, where he started his mission as a priest at St. Mary´s University. This was the same university where he had previously studied his bachelor’s degree many years ago. Up until now, Father Jim has been transmitting his story of faith and the word of Jesus to students, faculty, staff and other members of the St. Mary´s Community. "What kept me here was, without a doubt, the human warmth of people," he said.

Last Friday March 22, 2019, Father Jim Tobin celebrated 50 years of a proud life at The Society of Mary, 15 of which were spent in Texas. He said that thanks to his journey and the opportunity to know a new culture in Texas, he learned that life is not just about money, power, prestige and authority, but is about loving and compassionate service to our brothers and sisters.

“The more grateful we are, the happier we would be. For all that has been thanks! And, for all that will be —YES.”
- Father Jim Tobin, SM

Matias Castro Delfino, born in Lima, Peru, is currently a student at St. Mary´s University in San Antonio, Texas studying a BBA in Management. He came all the way from South America to Texas looking forward to a getting a better education in the US, not just to become a better businessman, but to take that knowledge back and apply it in his country.

Adrianna Cruz My Roots: From Germany to Giddings
Desiree Rodriguez A Stand Against Discrimination
Amelia Tristan The Storyteller is a Love-Millionaire
See All Stories »