In May, 1954, daily life proceeded as usual in Laredo, Texas as the border town's downtown streets bustled with the sound of traffic and congestion. Crowds, like any other normal day, traveled back and forth between the United States and Mexico. Crossing the International Bridge was a daily routine for those who worked, attended school, or visited relatives on the other side of the river. Crossing the bridge also included the privilege of enjoying the amenities that the other city had to offer. In one hour, folks could be enjoying authentic Mexican tacos, while the next hour could be dedicated to shopping in American stores.

A bridge was what united two historic sister cities. This bridge served as a reminder that Laredo, Texas and Nuevo Laredo, Mexico were bonded by a distinct cultural identity and a sense of patriotism for two adjoining countries. Aside from possessing a strong relationship with Nuevo Laredo, Laredo enjoyed fresh drinking water and booming businesses; nonetheless, they were soon affected by a catastrophe. When a catastrophic natural disaster occurred in June 1954, normality ceased and was converted into damaged infrastructure, separated families, and a destroyed International Bridge that unlinked two countries. Since the pathway to the motherland next door became demolished, other means of transport were created. Years passed until the bridge that once united two nations was restored and ordinary life resumed.

In June, 1954, Hurricane Alice, one of the largest hurricanes ever to hit South Texas, developed and moved into northeast Mexico and Texas. Both Laredo and Nuevo Laredo experienced a tragic flood along the Rio Grande which left many homeless. The bridge that had once united both cities was damaged with no way to cross it; therefore, dynamite was used to completely destroy the bridge in order to eventually build a new one. A temporary pontoon bridge was built in which canoes and floats were used to transport people, animals, and merchandise. In this year, Beatriz Partida was thirty-eight years old. Although a hundred-and-one years old today, Mrs. Partida clearly remembers the sorrow and damage that the flood provoked on both sides of the border. Her husband, employed and centered in Laredo, TX, yet resident of Nuevo Laredo, Mexico, had to ride a canoe daily to arrive at his destination. The possibility of drowning loomed; nonetheless, there was no other method of transportation. Ms. Partida had to regularly cross the temporary pontoon bridge in order to bring fresh milk from Texas to her ten young children. None of her ten children were allowed by their parents to cross over the pontoon bridge for fear of drowning; therefore, they were unable to see their relatives or visit America during those years.

Ms. Partida recalls cows and horses dying and businesses and houses flooding as a result of Hurricane Alice. Despite there not being any human deaths, there was a loss of jobs. One business that flooded and was destroyed included a popular taco restaurant close to the border in which the Partida family enjoyed having lunch.

It was a miracle that Hurricane Alice did not cause any human deaths. Ms. Partida recalls the safety measures that the local officials in both cities were taking. Residents who lived in areas close to the bridge and the creeks in Laredo and residents who lived in low-lying neighborhoods in Nuevo Laredo were evacuated. Fresh clean water became scarce in both cities. Since the main water plant was destroyed, residents in Laredo, Texas had to travel miles in order to get clean water from a pump. This distress proved arduous as a low supply of water dehydrated many and endangered their health.

Fortunately, in 1956, the ruptured link between the two neighbor-nations was restored. Today, the bridge bustles with the movement of people visiting and living on both sides of the river.

Maria Guadalupe Partida was born and raised in Laredo, Texas. She is currently pursuing a degree in Political Science and Public History. 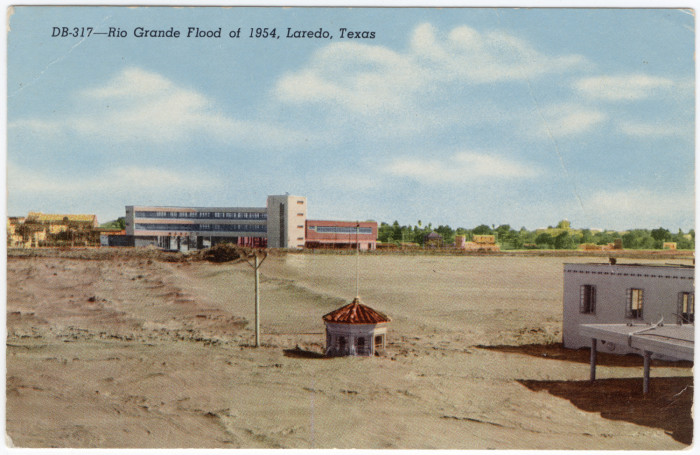 Share
Historic postcard showing the effects of a 1954 flood of the Rio Grande river in Laredo, Texas.