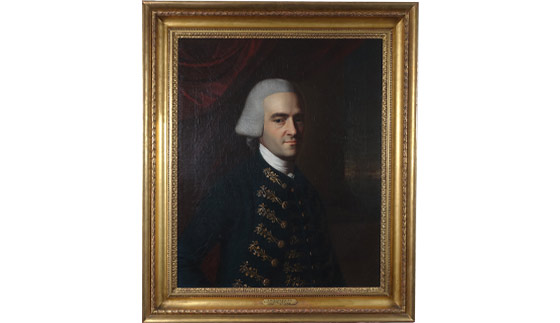 Painter John Singleton Copley (1738‒1815) was a leading American artist in the Federal Period. His portraits of American founding fathers documented the building of the nation.

John Singleton Copley had humble beginnings, raised by Irish immigrant parents in Boston. His career began in 1751 as a teenager when he worked as a painter and engraver to supplement the income from his mother's tobacco shop. He painted portraits of Bostonians and British officials, eventually becoming a favorite of the merchant class in colonial New England. Known for his straightforward approach, his portraits were detailed and realistic, as opposed to the more romantic style that was trendy in Europe. As his reputation for high quality work spread, he traveled, studied, and eventually made a permanent move to London in 1774 just before the start of the American Revolution. While there, he exhibited his paintings privately and sold prints of his work that reached mass audiences in England. The success of these strategies was unique in the commercial art world at the time.

While working in America, Copley painted many figures who would become the founding fathers of the United States. One of those subjects was John Hancock (1737‒1793). Hancock grew up in Massachusetts and after graduation from Harvard in 1754, began working at a mercantile house owned by his uncle in Boston. In 1764, he inherited his uncle's business, land, and fortune making him one of the most well-known people in the colonies. As a key figure in the shipping and import business, he was concerned with colonial tax policy as tensions with Britain were escalating. Hancock became a leading political figure in the colonial assembly beginning in 1766 where he would oppose the Townshend Acts and call for the removal of British troops after the Boston Massacre in 1770. Later he became a patriot of the American Revolution, signer of the Declaration of Independence, and statesman in the new nation.

The success of the American Revolution started a long period of upheaval in Europe and colonial territories in North and South America. This Age of Revolution, inspired by concepts like individual liberty and equality under the law, eventually led to conflicts that reshaped the ruling powers and boundaries of what would become Texas.