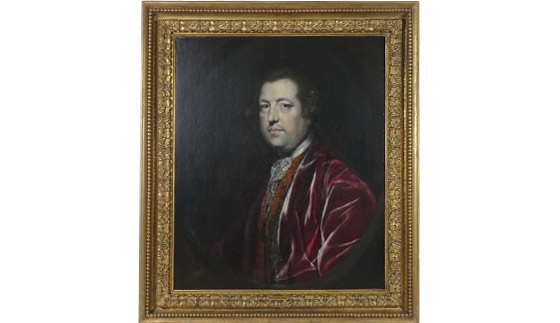 Born in 1723, Sir Joshua Reynolds took an early interest in art. He apprenticed under a portrait painter Thomas Hudson for several years starting in 1740 before traveling around Europe from 1749 to 1752 where he was inspired by the artwork of the Italian Renaissance. He opened his own studio after he returned to London and combined the English style of portrait painting with ideas from his travels to create works that transformed the genre. Reynolds often included dramatic elements like props, costumes, fictional landscapes, and classical symbolism which showed that portraiture could be more than formally illustrating a subject but rather a way to capture a person's character. The subjects of his work were often nobility or members of the political elite which provided him influence with the wealthy and powerful. When the Royal Academy of Arts was founded in London in 1768, Reynolds was elected as its first president and served in that role until his death. He was knighted by King George III in 1769, making him one of few artists to be given such an honor at that time. In addition to his own prolific painting career, his years of teaching at the Royal Academy provided up and coming artists a place to learn and exhibit their work, and through his efforts he raised the status of art and artists in Britain.

In 1765, Reynolds painted this portrait of politician Charles Townshend (1725‒1767). Townshend was a skillful but flawed politician who was known for his strong opinions and quick wit. Born into British nobility, his health suffered at a young age and disease made his schooling and career a struggle. He was educated at Cambridge and Leyden and after graduation in 1747, was elected to Parliament. From these beginnings Townshend moved his way through a number of governmental positions including those at the Board of Trade and Board of Admiralty where he was concerned about the cost of military defense of the American colonies. This concern spurred his interest in increasing British powers of taxation and control over the colonies. In his last official act before his death in 1767, he oversaw the passage of four resolutions that became known as the Townshend Acts which threatened American colonial traditions of self-government and imposed revenue duties on items imported into the colonies. These tax policy measures intensified conflict with the American colonies and eventually led to the American Revolution.

The success of the American Revolution started a long period of upheaval in Europe and colonial territories in North and South America. This Age of Revolution, inspired by concepts like individual liberty and equality under the law, eventually led to conflicts that reshaped the ruling powers and boundaries of what would become Texas.