JANUARY 5, 2016 (AUSTIN, TX) — Life and Death on the Border 1910-1920, a groundbreaking new exhibition produced by the Bullock Texas State History Museum, opens in Austin on January 23, 2016 and explores a violent decade in Texas history during which some of the worst racial violence in United States history occurred. Photographs, court documents, newspapers, family histories, eye-witness accounts, and rare artifacts, such as a saddle belonging to Pancho Villa and a decoded page of the Zimmerman Telegram, offer a re-examination and fresh perspective on this difficult chapter of history that also saw the rise of the Mexican Revolution and World War I. The violence in Texas would spur the Mexican American civil rights movement and inspire a renaissance of literature, art, and music along the Texas-Mexico border.

"We are proud to have organized this exhibition that closely examines an important decade in the history of Texas and Mexico," Director Dr. Victoria Ramirez said. "Working with the scholars from the Refusing to Forget project, the exhibition introduces new scholarship and brings together 65 artifacts from 20 individual and institutional lenders."

Clothing, family photographs, and everyday items illustrate life in the border region at the turn of the 20th century. Postcards, newspaper articles, and eye-witness accounts document state-sanctioned violence at the hands of Texas Rangers that many of the region's residents experienced. Political memorabilia, along with art, music, and literary works round out the exhibition to show the lasting legacy of those who lived in that region during this era.

Much of the nation's attention was focused overseas during World War I, but the Texas-Mexico border was experiencing its own brutal conflict at the same time. More than 1,200 of the 1,900 miles of the border shared between the U.S. and Mexico are located in Texas. And, in the last half of the 19th century, longtime inhabitants of the border region included ethnic Mexican families that owned land, maintained ranches, and wielded political power in local government.

At the turn of the 20th century, railroads and roads brought more Anglo settlers and speculators to the area and Tejano landowners lost thousands of acres of land. This, along with the rebellion against a corrupt Mexican government stirring in northern Mexico, resulted in political and economic turmoil. By the time the Mexican Revolution erupted in 1910, tensions had escalated and violence spilled over the border into Texas. People of Mexican descent were increasingly seen as potential threats to national and state stability and became the targets of some of the worst state-sanctioned violence in U.S. history.

Texas Governor James Ferguson called on the Texas Rangers to restore order along the border, and by 1916, hundreds of untrained Rangers patrolled the state, often reigning with terror and intimidation. On view at the Bullock Museum will be photographs and postcards illustrating the militarization of the Texas border region, such as a 1915 postcard titled "Dead Mexican Bandits" which shows Texas Rangers with their lassos around the corpses of those slain during a raid. Little effort was exerted to distinguish between rebellious Tejanos and those not taking part in the uprising. In 1919, the Texas Legislature began an investigation of the Texas Rangers for the torture and murder of civilians.

As the U.S. was entering WWI, international forces sought to intervene in the border conflict and gain Mexico's support, as illustrated by a decoded page of the 1917 Zimmerman Telegram that will be on view in the exhibition. The telegram is evidence that Germany offered Mexico the prospect of regaining New Mexico, Texas, and Arizona in exchange for joining them in war against the U.S. Though Mexico showed little interest, the telegram ensured that many Americans would perceive Mexicans as siding with Germany in WWI.

In the aftermath of this turbulent period, the Mexican American civil rights movement gained strength, and artifacts related to the formation of the League of United Latin American Citizens (LULAC) in 1929, and the Chicano movement that flourished in the 1970s, will be on view.

The Bullock Museum worked with a group of scholar-advisors who are part of the Refusing to Forget project to commemorate the centennial of this period of state sanctioned anti-Mexican violence. Scholars include Monica Muñoz Martínez, Brown University; Ben Johnson, Loyola University; Trinidad Gonzales, South Texas College; Sonia Hernández, Texas A&M University; and John Morán González, The University of Texas at Austin. This original exhibition delves into a little-known but highly significant period in U.S. and Texas history. Texas' unique trans-national role in history is highlighted as the complex issue of race relations is explored.

Life and Death on the Border 1910-1920 will be on view through April 3, 2016 in the Rotunda Gallery at the Museum. Support for the Bullock Museum's exhibitions and education programs is provided by the Texas State History Museum Foundation. For more information and tickets, visit TheStoryofTexas.com. 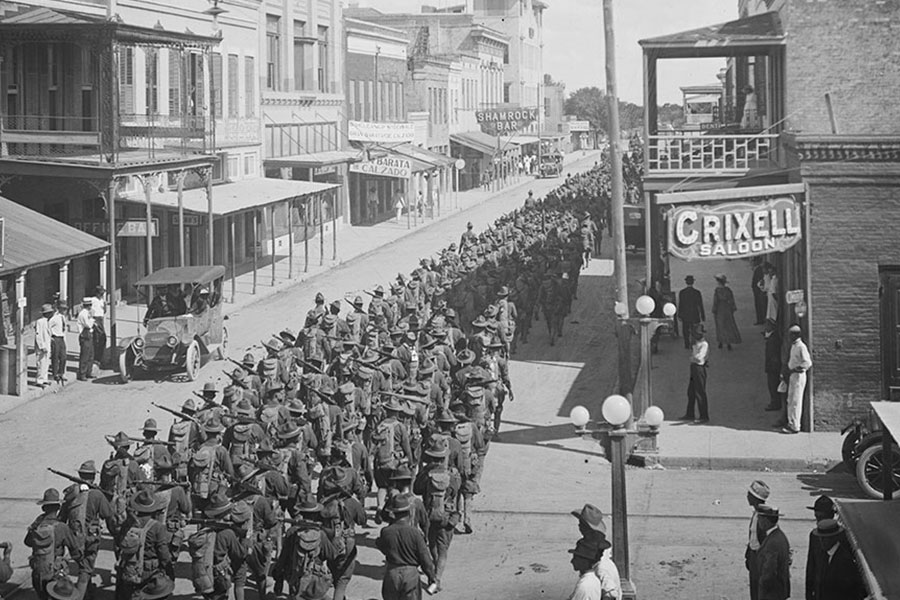 Life and Death on the Border 1910-1920, a groundbreaking new exhibition produced by the Bullock Texas State History Museum, opens in Austin on Jan. 23, 2016 and explores a violent decade in Texas history during which some of the worst racial violence in United States history occurred. View Media Kit