JULY 15, 2019 (AUSTIN, TX) — The original exhibition Cowboys in Space and Fantastic Worlds is now on view at the Bullock Texas State History Museum in Austin. The exhibition highlights more than 150 years of pop culture and sheds light on the influence of westerns in science fiction.

Beginning in the the 1800s with titles like From the Earth to the Moon by Jules Verne, characters, stories, and settings from westerns influenced the new genre of science fiction. The frontier moved from the wild west to distant planets as the space race heated up in the 1950s and space-themed toys, comics, television, and film further erupted in popularity. From these early visions through Star Wars, Star Trek, and Firefly, space westerns have made an indelible impact on pop culture.

“The exhibition invites visitors of all ages on this fascinating journey to see how Wild West characters go from riding horses on the Texas plains to flying space ships around distant planets,” said Franck Cordés, curator of the exhibition. “My childhood love of Westerns and Science Fiction turned into playful research on the surprising, more than a hundred-year-old history and prevalence of cowboys in space.”

Cowboys in Space features more than 100 artifacts that explore the space western genre, including an 1874 edition of From the Earth to the Moon, an original Buck Rogers XZ-31 toy pistol, a limited edition reproduction of Han Solo in carbonite from Star Wars, animation cels, rare comic books, toys and art. Also featured in the exhibition is an original prop phaser from the Star Trek 1960s original series, and seen in Serenity/Firefly, Malcolm Reynold's Moses Brothers Self Defense Engine Frontier Model B.

Visitors of all ages can immerse themselves in their own space western stories by creating comic book covers, listening to space cowboy songs on a custom made jukebox, watching film and television clips, listening to the sounds of ray-guns, blasters and phasers, and posing before intergalactic backgrounds.

"This exhibition provides a fun and thoughtful look at the blending of western themes and science fiction, and we're delighted to bring these fantastic artifacts and visionary artists to our visitors. It's a walk down memory lane with new discoveries along the way, just right for sharing with family and friends," said Bullock Museum Director Margaret Koch.

Cowboys in Space and Fantastic Worlds is on view until December 1, 2019. For more information, visit TheStoryofTexas.com. 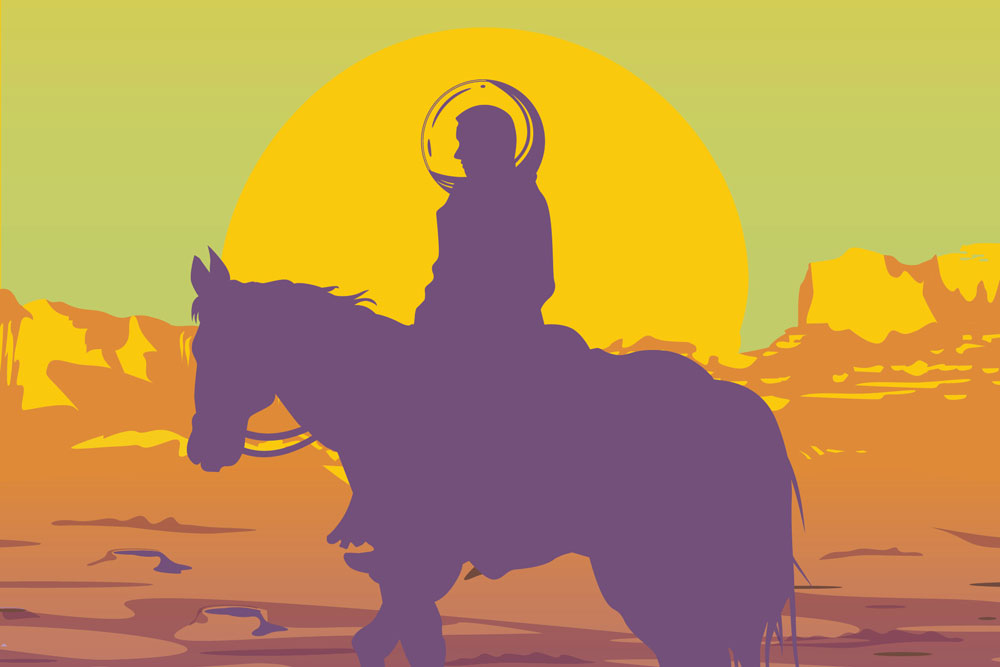 Cowboys in Space and Fantastic Worlds is a journey through the history of Westerns in Science Fiction. View Media Kit