JULY 10, 2018 (AUSTIN, TX) — One of the Bullock Texas State History Museum's largest and most notable artifacts, the North American Aviation AT-6A "Texan" airplane, took flight once more this week. Reassembled from individual sections previously on display on the third floor of the Museum, the iconic World War II-era, single engine aircraft now soars over the three-storied exhibition atrium in a stunning display of airforce might.

The Dallas-made aircraft, one of the few remaining AT-6A airplanes in existence, was flown extensively stateside by the Women Airforce Service Pilots (WASP) and was instrumental in training WWII combat pilots of the Army Air Corps here in Texas. On view since the Bullock Museum opened its doors in 2001, the AT-6A takes it place among the Texas State Capitol's Goddess of Liberty, part of the collection of the State Preservation Board, and the 300-year-old hull of the French ship La Belle, excavated by the Texas Historical Commission from Matagorda Bay, as one of the Museum's signature artifacts. With a cruising speed of 145 mph, more than 15,000 of the planes were produced, many in a factory near Dallas, and only a few dozen are estimated to remain in existence.

"We're so excited to reintroduce this powerful aircraft to the public and truly show visitors its size and impact on both Texas and the nation. This plane was the workhorse of WWII, and suspending it to be seen in its full glory is a perfect way to emphasize the contributions of the amazing women pilots of the WASP, as well as the Army Air Corps pilots who trained in Sweetwater, Texas. We owe them a great deal for their dedication and service to the war effort," said Margaret Koch, Bullock Museum Interim Director.

Stepping off the third floor elevator, the "Texan" appears dramatically before visitors, banked for effect with its impressive design visible from every angle. To help visitors understand the power behind this incredible aircraft, the Museum will soon unveil a brief documentary of planes flying in formation in modern day re-enactments, filmed in the air and from the ground in 2018. With a view out to the plane from the third floor, visitors will hear and see first hand the enormous sound of the engine and the incredible skill required to maneuver the aircraft from take-off to landing, all from the passionate pilots who take pride in re-building planes to fly across the country today. The dynamic 600 hp Pratt & Whitney engine that powered the "Texan" will be easily accessible in a case nearby, for an up-close view of its intricacies.

"Lucky Lindy" Segall, an advisor on the project whose parents both served the nation during WWII and has served as an advisor on the project said, "Mom spoke almost lovingly of the “Texan”… said it was her favorite trainer. [It was] the last check ride required before receiving her silver wings at WASP graduation, March of 1944. Sixty years later, I flew an AT-6 with a lady barnstormer in Tennessee… and now understand why."

The "Texan" takes flight as the Bullock Museum is offering free admission to active military members and their families through the Blue Star Museums program. The AT-6A also flies directly above work in progress on Becoming Texas: Our Story Begins Here, a new exhibition exploring 14,000 years of Texas history that will open on the Museum's first floor in November. 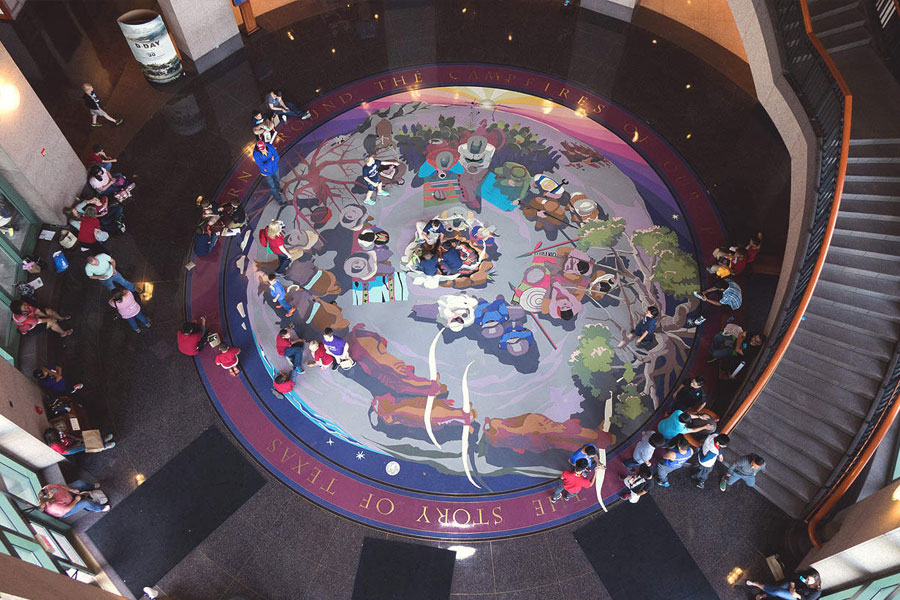