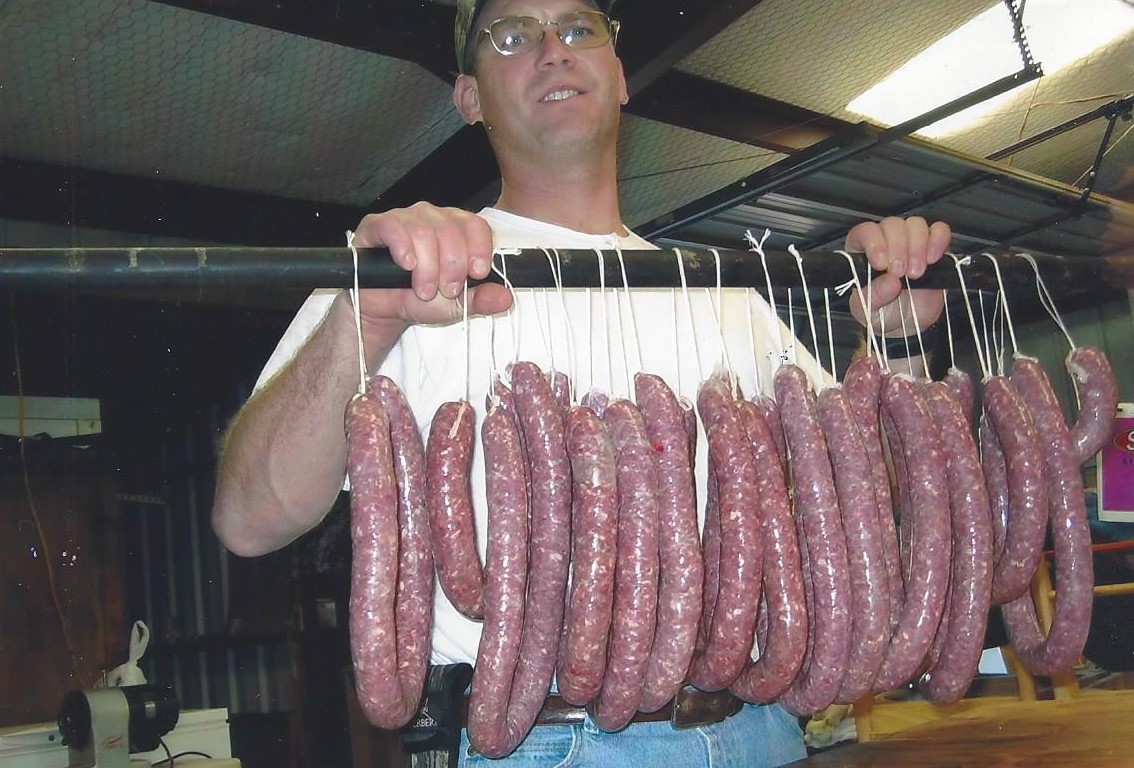 My father’s favorite family tradition, even to this day, is something we simply call “butchering” or making sausage or wurst (pronounced woosht).

He grew up in a small farming community in Central Texas called Warda, located between Giddings and La Grange. Our ancestors were Wendish people who settled there in the mid 1800s and came to this area from Germany/Prussia mainly to escape religious persecution. They brought their sausage-making skills with them and passed this knowledge on to subsequent generations. Early on, these skills were important as a means of survival since there were no stores nearby to purchase meat and food, so they had to become self-sufficient.

We make sausage once a year, always in the winter and usually after Christmas and around New Years. It is done in the winter because it must be cold, or the meat would spoil. This also coincided with deer hunting season in Texas so most of our sausage was made with pork and venison mixed. This was a huge production for our family and extended family and usually involves the grandparents, parents, aunts, uncles and most of the children unless they were too young to be of any help. Everyone had a certain job to do. Once you learned certain jobs, that is what you were expected to do every time we butchered. It must have something to do with German efficiency that was brought over as well.

The day would start early in the morning shortly after daylight with the sound of a gunshot and the pig was mercifully slaughtered. Water was heated in a huge cast iron kettle that hung over an open fire. The boiling water was then poured over the pig and the men would take turns meticulously scraping the hair from dead animal with butcher knives until it was perfectly clean. While the men did most of the hard labor, the women had an equally tough (nasty) job of cleaning and preparing the intestines that would be used to stuff the sausage. My dad’s Granny would stand at a table for hours at a time working and supervising his mother and aunts making sure everything was perfectly clean and ready for stuffing. Nothing went to waste as most of the meat was ground up and stuffed into sausage. This is the when the fun begins because most of the hard work is done and everyone would come together to help tie the ends of the sausage together with string and have a few cold beers to commemorate the event. Stories and jokes were told, and everyone had a great time as a family.

Finally, the sausages were hung in the smokehouse and smoked for several hours with a combination of hickory and oak wood. His grandpa always liked to put one piece of pecan wood in the mix. After the sausages were smoked, everyone helped package the meat in white butcher paper and everyone was given an equal share for their hard work. Some of the sausages were left in the smokehouse and dried for three to four weeks and made into something like jerky that would last a long time without spoiling, even after winter was over and the days began to heat up again. This is something else the old timers learned and passed on to us.

Even though times have changed, and it is much easier to go to HEB to buy sausage these days, nothing beats coming together and enjoying each other’s company while honoring this great family tradition.

My name is Alexa Lange and I am a Freshman Biology major at St. Mary’s University. I was born and raised in Cypress, Texas. I play on the St. Mary’s softball team as a third and second baseman.