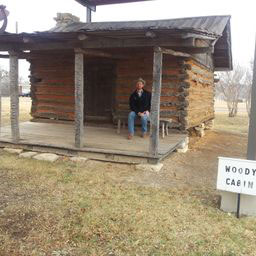 As a child growing up outside of Springtown in rural Parker County, I knew from an early age that my grandmother’s family had played a significant part in settling the area northwest of Fort Worth prior to the Civil War. While I found that interesting and took a level of pride in this history, this information didn't leave a lasting impression on me. But in retrospect, I now realize this history was impacting me in ways I didn’t realize.

I spent the summers playing on an area of land homesteaded by my great-grandfather that bordered Charles Goodnight’s original ranch and was larger than some state parks. The road we took to and from town was named after Goodnight. When visiting graveyards in the area, I would see tombstones for distant relatives with birth and death dates stretching well into the 1800’s. A connection to the land and history of Texas was imprinted on me in some form or another almost daily.

While going to college at the University of North Texas at the tail end of the 1990s, I would pass through Decatur in Wise County on my trips to visit family back home. This hour-long drive was primarily through old farmland, and the typical alternative rock music I listened to just did not seem to fit the surroundings. So I looked back to the music I listened to as a young kid— a kid, by the way, whose first tape purchase was Willie Nelson's “On the Road Again”— and tuned back into country music while on the drive. I started listening to country music way more frequently than I would ever want to admit to my garage rock friends, but for some reason, it just made sense on Highways 51 and 380.

As I cut through Decatur, I passed by the Wise County Heritage Museum. Around that time, I had learned not just that I was descended from Sam Woody, a man who came to Texas in the 1840s and was an original settler of Wise County in 1854, but that the museum inside had a display and information on him. Due to a combination of their never being open when I passed and my never making it a point to make a special visit to the museum,  I was never able to go inside. However, just driving by helped to create a better connection to the larger scope of the area. I began to have a new understanding and appreciation.

As years passed, I moved away from the area and the Wise County Heritage Association moved the original Sam Woody Cabin from its location in Deep Creek to the grounds of the museum. I had seen pictures of it, and I was looking forward to the time I would be able to visit. I became especially  curious about Sam Woody in the summer of 2012 when I found out that in addition to settling Wise County, his small home was a rest station for travelers and a trading post for the Americans Indians of the area. In some publications, I have seen it stated that his family was the only one of the original settlers not to have a family harmed in skirmishes with the Comanches, a sign of respect to him and his function as a go-between. He fought in the Civil War, was a Texas Ranger who participated in the search for Quanah Parker, and much more.

That Christmas while I was visiting family in the area, I finally made it a point to visit the Wise County Heritage Association and see the cabin. While I was walking around and looking at all the artifacts, I started to understand the world that shaped my grandparents and not just the grandmother that was a descendant of Sam Woody. I saved the cabin for last. While walking into it, I felt a strange pride for family members I had never met. I began to understand how their lives and what they did when they left Roane County, Tennessee, in the 1840s and 1850s had played a part in shaping mine. Later, I found this quote from Sam Woody, given towards the end of his life, that I think expresses a sentiment that my family still holds true:  “The prettiest sight I ever saw is a new country, where man has never been and which is just as the great God of Heaven left it.”

Eric Robinson works in elementary education, hosts at a drive-in, and writes and does presentations on Texas baseball history.

Join 25 others and favorite this