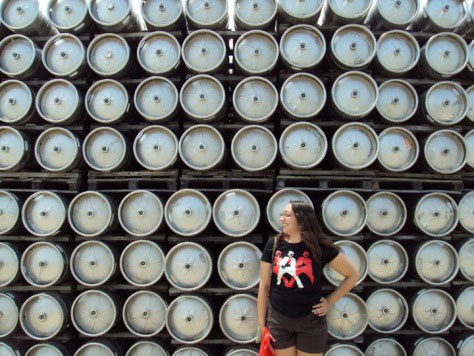 One summer morning, shortly after graduating from the University of Texas at Austin and before beginning my first job, a friend and I hopped in the car and set out from Austin to Shiner. Our destination was none other than the Spoetzl Brewery. We had an easy two hour drive with our only incident being a moment of worry as we passed through Luling. Not knowing about Luling’s oil industry, I began to expect that the check engine light would turn on at any second as the smell of gasoline filled the car. Thankfully, my roadtrip companion assured me that it was probably not the car, and it would pass. She was indeed correct, and our ride continued uncompromised.

We arrived in Shiner and made our way to the largest building in the town– the white brick structure that houses the Spoetzl Brewery. Leaving behind the hot, humid stillness outside, we entered the brewery in time to join a few other visitors for a tour. There we saw a steady stream of bottles moving along the curving ramps of the machinery and learned that every drop of Shiner’s various varieties of beer comes from this single location. Having this supply of delicious brews in my central Texas backyard made me appreciate my locale and its proximity even more.

Following the tour, we headed back to the tasting room to sample some of the goods, and then decided to explore the brewery from the outside. We walked around to the back to find an impressive sight: stacks upon stacks and rows upon rows of shiny silver kegs. Some were neatly stacked into ordered, towering walls; others were strewn about the ground looking like the aftermath of an epic dinosaur frat party. This discovery provided enough entertainment to pass the time need to digest our tasty brews and also proved to be a good ending to our time at a great Texas roadtrip destination.

Elena Bessire is a native Texan from El Paso and currently lives in Austin where she works as a teacher in Central Texas schools as well as with the Cine Las Americas International Film Festival.