Poster, Have You Paid That Poll Tax?

A reminder to women to pay the poll tax 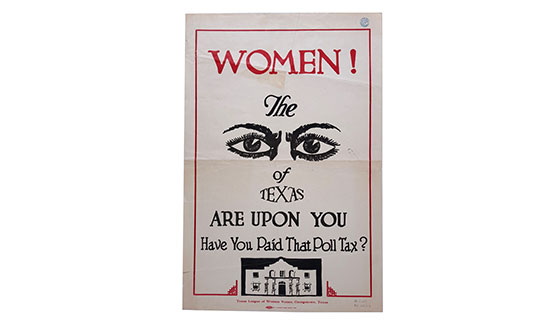 Share
Poster, Women! The Eyes of Texas Are Upon You Have You Paid That Poll Tax?, 1920s

All Texas voters were required to pay a poll tax, usually $1.50, before they could vote. This was a requirement put in place by the legislature in 1902 to keep minority groups from voting. It was also a barrier for women who had little access to their own money. Women were exempt from paying the poll tax in the July 1918 primary election (the first where they were elibgible to vote), but required to pay the tax thereafter.

Exhibit: Sister Suffragists
This artifact is not on view.

Poster, Have You Paid That Poll Tax? Artifact from Austin