Crutch used by Houston following the Battle of San Jacinto 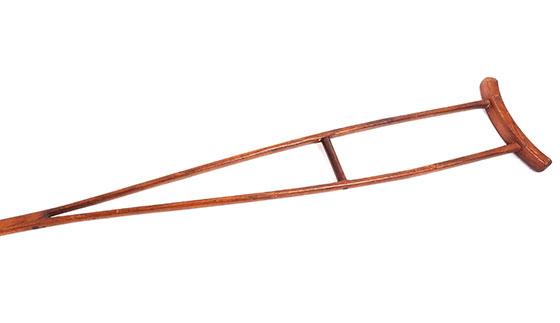 Share
Wooden crutch, 1836. Sam Houston was shot in the leg while leading his troops at the Battle of San Jacinto. He used this oak wood crutch to move around in the days following the battle.

Sam Houston, commander of the Texan Army injured at the Battle of San Jacinto, used this oak wood crutch to move around in the days following the battle.

Houston was already plagued with war injuries when he was shot at San Jacinto. He had been walking with a cane or crutch since the age of 21 after receiving an arrow wound to the thigh in 1814. At San Jacinto, a musket ball shattered the front part of Houston’s tibia bone just above his ankle. Within days, the wound became inflamed and too painful to bear and the army surgeon sent Houston to New Orleans to have the wound treated.

Houston's various war wounds, compounded with old age, would necessitate the use of a walking aid the rest of his life.

Read more about the Battle of San Jacinto and related artifacts on the Bullock Museum's Medium channel.